Courtesy of what I've learned from friends, some more commentary on Rihanna and her notorious "Hard" video.

First, and I found this rather astounding, among Rihanna's 13 tattoos (I think that the count is correct) is one written in Arabic script! It reads, as far as I can tell, al-hurriya fî masîh (الحرية في مسيح) or maybe al-hurriya fî al-masîh (the latter would be more correct), that is, "freedom in Christ" or more literally, "freedom in the messiah." Christ/masîh appears right under her left breast, so it's not seen all that often. These are the two shots I could find. 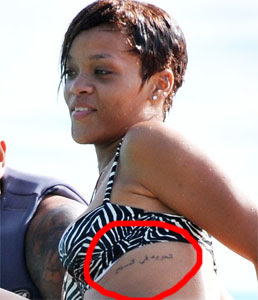 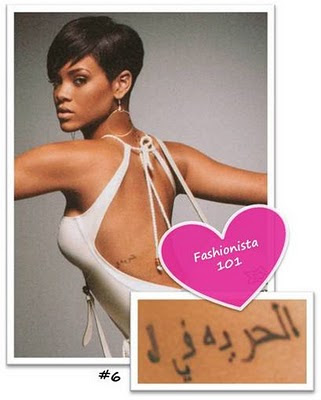 This one, curiously, makes it look as though the original had been altered slightly, so that the article al- had been added. It doesn't show masîh (Christ), just al-hurriya fi-al.... Those of you who know Arabic will note that there should be no link between the fi and the al. So it's corrected incorrectly.

The statement of course is not one that you would probably want display when prancing around in your porno-military outfits on your invasion of Iraq/Afghanistan. It would make you appear as if your campaign for freedom/democracy was in fact a Crusade. But in fact, my friend Robin said that she thought she spotted an Arabic tattoo, in the late sequence where Rihanna carries the banner. (Here's the shot from my original post.) Given, Robin says, that the banner is black, might it be Shi'ite/Abbasid?!!

Keen eyes, Robin! Here's another shot, with the banner.

The friend who brought Rihanna's Arabic tattoo to my attention said that he had thought it might mean that Rihanna was not imperialistic in her views, in contrast with the very patriotic, and Walmart-friendly, Beyoncé. Turns out not to be so.

(Did Rihanna get the idea of an Arabic tattoo from Angelina Jolie, whose right arm is adorned with a tattoo that reads العزيمة, "al-'azeema" or determination?)

Second, Robin comments on the Arabic that appears on the wall of the house. 'The arabic graffiti on the wall reads: "li-llah [can't see] ilayhi raji'un," which is for some reason broken out from the expression "*inna* li-llah wa-inna ilayhi raji'un," "we belong to god & to him we return," from Surat al-Baqarah, verse 156 [the Qur'an], what you say when you hear that somebody has died. it's interesting in the context of the song; hard to believe that anybody involved in the production had thought it through that much, though maybe somebody had.'

Thanks to Robin and her keen eyes and superior (to my own) Qur'anic knowledge.
ADDENDUM, Jan. 7, 2010. Iraqiguy put up this comment on the original Rihanna post:
...the expression "انا لله و اتا اليه راجعون" meaning "we all belong to Allah and verily to him we shall return"

It's usually written on the walls of houses where people would have just passed away. It's arabic and islamic etiquette for what to say when you hear about a death.

this expression is ofcourse very prevalent in Iraq and Palestine and every arabic country involved in war or civil unrest, where death is a common occurrence.
Thanks! I would only add that, in the context of the vid, it's interesting that the soldier walks by that written on the wall. When the perpetrator of the death being commemorated may, in all likelihood, have been the US military.
Third, Geoff says: "the hat in the card-playing still looks VERY much like a WW2-era German military cap; note the eagle ... maybe Afrika Korps? Disturbing."

I think he's right, especially about the eagle. See here.
Posted by Ted Swedenburg at 12:30 PM

With its different protrusions and symbolic and calligraphic presence, Arabic tattoo mesmerizes youth from all walks throughout the world.

I doubt a native (and I'm one), would prefix Azeemah with an article of definition 'al/el' because it would sound as ridiculous as "The determination". As ridiculous as say, 'the freedom'rather than just 'freedom'.

I am big fan of Rihanna and so I loved her every tattoo. Rihanna tattoos are very famous and impressive. Her tattoos are really symbol of her strength. These tattoos are as notable as her songs are.