M1 of Dead Prez in Gaza (and Kufiyaspotting #50)

Those familiar with the work of the rapper Dead Prez will not be surprised that he is now in Gaza, as part of a 200 person delegation, including former Georgia Congresswoman Cynthia McKinney and New York City Councilman Charles Barron, bringing in humanitarian aid under the auspices of Viva Palestina.

Hopefully he will have a chance to perform in Gaza in the company of Palestinian rappers, as he did back in April in Chicago:

M1 is one of those kufiya wearing rappers who are knowledgeable about Palestine and who is active on behalf of Palestine.

Here's what he told Youth Radio about Gaza in March:

At the seat at every one of these motions that happen in the Middle East is the instability that's brought on by the oppression that's been in that region forever. Since 1948, there, the interjection of the same type of imperialism that shakes the world everywhere around in Africa, in the U.S. The reason I act the way I act is the same reason why the Palestinian people are being attacked. And I think there's one way out, there's one way towards peace and that's the same thing as Peter Tosh say, equal rights and justice. 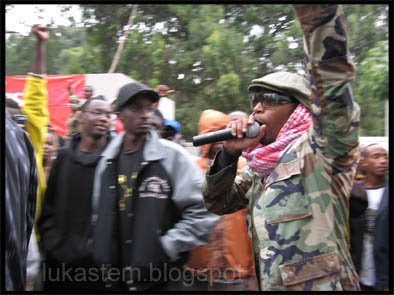 Here he is at the 2008 Slamdance Housewarming Party in Park City, Utah (the alternative to Sundance). 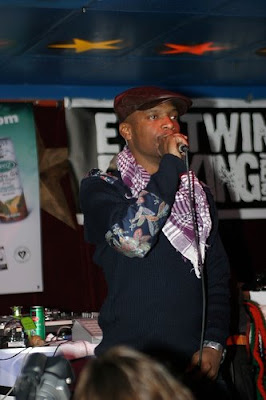 M1 was also present at the 2008 Sundance for the screening of Slingshot Hiphop, but I haven't found any pictures of him garbed in kufiya there.
Posted by Ted Swedenburg at 8:03 PM

God what an illiterate twat that guy is!

You wouldn't be saying that if you have listened to some of the sublime lyrics on any one of his tracks.

that's a great article, ted! anne frank also appears with a kuffiyeh in amsterdam graffiti and there were a few others i have to retrieve from my memory. stand by for my research attempts.

amina, cheb mami, rachid taha and a few others were also extremely popular during the early 90's, before natasha atlas became popular. this right around the time of cheb khaled's breakthrough in the west. at that time i think natasha atlas was still collaborating and dancing with jah wobble/transglobal underground.

the bendali family is great... i post their song "do you love me" on my facebook homepage once a month. i loved the song by their relative yasmine hamdan... i read her name when i was looking them up on the internet a while back but didn't know who she was. now i do... she's good!

it's great that an afghani and a lebanese are collaborating and rocking the dance charts (or at least trying to)... and what a coincidence that i was just listening to this song and the background music on masterchef (BBC cooking program) resembles the same beat. hmmmmm...