Kufiyas are all over "The Hurt Locker"

To my great regret, The Hurt Locker has not yet opened here. Maybe, if NW Arkansas fans of Kathryn Bigelow are lucky, it will open later this month. Carolina, who is fortunate enough to live in NYC, has already seen it, and informed me that she spotted what looked like a kufiya on one of the characters. This prompted me, naturally, to get on the case, and a search of publicity stills turned up a number of kufiyas. Here's one of Ralph Fiennes as Contractor Team Leader. 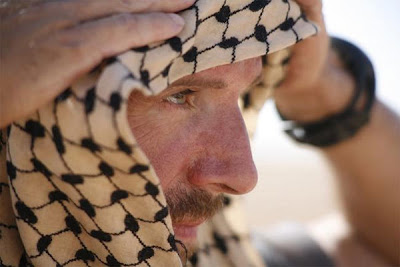 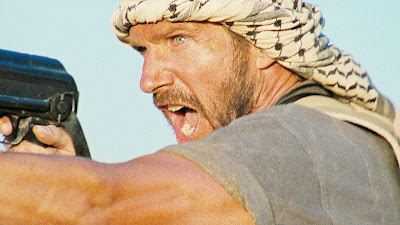 There is of course, a long tradition, of Western fighters in the Middle East putting on kufiya. The guards of the early Zionist colonies and TE Lawrence (Lawrence of Arabia), for instance. Kufiyas were part of the uniform issued to British forces posted throughout the Middle East after the First World War, and called shemaghs. And here's what wikipedia says about their current use by US forces in the Middle East:
Since the beginning of the War on Terror, these keffiyeh, usually cotton and in military olive drab or khaki with black stitching, have been adopted by US troops as well. Their practicality in an arid environment, as in Iraq, explains their enduring popularity with soldiers. Soldiers often wear the keffiyeh folded in half into a triangle and wrapped around the face, with the halfway point being placed over the mouth and nose, sometimes coupled with goggles, to keep sand out of the face. This is also commonly done by armored, mechanised and other vehicle-borne troops who use it as a scarf in temperate climates to ward off wind chill caused by being in moving vehicles. British soldiers deploying to Iraq or Afghanistan are now issued with a tan-colored shemagh.

The wikipedia entry captures the material practicality of the kufiya, but misses its symbolism. The fact that the kufiya is associated with the "terrorists," with the "bad guys," is also a key element of its attraction. Wearing it seems to capture, in some way, the "evil" power associated with the enemy.
But what about this publicity still, which shows director Kathryn Bigelow and an unidentified assistant in kufiyas? (See kufiyaspotting #48.) Bigelow's is a "local" kufiya, but her assistant's is in "hipster" colors. Mixed messages...Associating with the soldiers...with the locals...with the US hipsters... 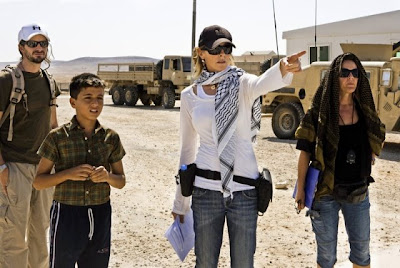 Copyright © Summit Entertainment
Posted by Ted Swedenburg at 10:00 AM