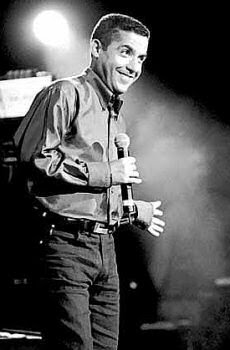 Unbelievable! The Prince of Rai, dethroned. Here's a report from the New York Times on July 4 (p. A5):

A French court sentenced the popular Algerian singer known as Cheb Mami to five years in prison for abducting a former lover in 2005 and forcing her to undergo an abortion, which was mishandled. The singer, whose real name is Muhammad Khalifati, had denied the charges but expressed remorse, saying he had been manipulated by his entourage and had panicked when he found out the woman was pregnant. The woman gave birth to a healthy daughter, now 3. The singer has had several hits in France and sang on Sting’s 2001 record “Desert Rose.”

The only reason, of course, that this made the news is because of Mami's appearance as a sideman with Sting. Cheb Mami has not only had hits in France, but prior to moving there in 1985, lots of hits in Algeria.

If you read French, check out this report by Daoudi Bouziane in Libération, which reports on a bizarre interview Mami gave to the Algerian newspaper, le Quotidien d'Oran. Mami blames his Jewish manager, Michel Lévy, for giving him bad advice. And also he takes pains to mention that the woman in question, the photographer Isabelle Simon, is a French Jew. He claims to be a victim of a media plot, due to the fact that he's a successful Arab star.

According to the BBC, Mami's manager (also known as Michel Lecorre) was sentenced to four years for plotting and organizing the assault, and two of Mami's aides, Hicham Lazaar and Abdelkader Lallali, were convicted in absentia. Prosecutors claimed that Levy lured Simon to Algiers in August 2005, under the pretext of a business trip.

Here are more details on the crime Mami was accused, and then convicted of, from contactmusic.com:

Mami is accused of trying to force an abortion on his former girlfriend, a magazine photographer, during a trip to Algeria in 2005. It is claimed his alleged victim was locked in a house belonging to one of the singer's friends, where two doctors attempted to perform an abortion. She later realised the foetus was still alive and decided to keep the child....Mami has reportedly accused his manager of organising the abortion plan.

(Thanks to Lisa and Arun.)
Posted by Ted Swedenburg at 8:28 PM

hey
posting a comment here was the only way i could figre out how to tell you this
i just read "islam in the mix: lessons on the 5%"
you realy kicked some knowledge there. its too bad i didnt read it in 97, but i was only 5
i am now a student of the universe, and the paper was "really real"

free Cheb Mami! The victim was just a woman!

Go to hell and I think 5 years of prison is not enough!

What a scum bag... Mami and the chicken that didnt leave his name...

That ruins listening to his music.