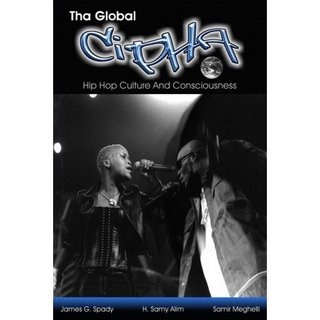 I just received a note from James Spady informing me of the publication of Tha Global Cipha: Hip Hop Culture and Consciousness, co-edited by Spady, H. Samy Alim, and Samir Meghelli. It's a collection of interviews with US and international artists with (presumed) connections to hip-hop, including Jay-Z, Sunni rappers Mos Def and Eve, reggaetón star Tego Calderon, dancehall artist Buju Banton, rai singer Khaled, and French rapper Booba. Read more about it here.

I assume that the books resembles the format of Spady's earlier volumes: Nation Conscious Rap: The Hip Hop Vision (co-edited with James D. Eure, 1991), Twisted tales: in the hip hop streets of Philly (co-edited with Stefan Dupres and Charles G. Lee, 1995), and Street Conscious Rap (co-edited with Charles G. Lee, H. Samy Alim, and C. G. Leedham, 1999). These are all massive volumes with invaluable and in-depth interviews with well-known as well as important but not so well-known rap artists. What I find particularly valuable about these volumes is that there is a wealth of material on the Islamic (from Sunni to Nation of Islam to--especially--Nation of Gods and Earths) sympathies and beliefs of many rap artists. Spady has been an indefatigable researcher on such subjects, who is also very attuned to the global dimensions of hip-hop, Afrocentric thought, and Islamic-inflected rap.

H. Samy Alim teaches Anthropology at UCLA and has authored a number of articles on hip-hop. I like what he does, but I have a quibble with him (for an earlier quibble, go here). In his article "A New Research Agenda: Exploring the Transglobal Hip Hop Umma" (in miriam cook and Bruce Lawrence, eds., Muslim Networks from Hajj to Hip Hop, 2005), he tends to assimilate the beliefs of members of the Nation of Gods and Earths (NGE) like Rza to the beliefs of Sunni Muslims like Mos Def. Alim goes so far as to assert that "the belief in Allah and the revelation of the Quran through the Prophet Muhammad is a tenet of all Muslim communities" including the Nation of Gods and Earths (p. 266). This is a misrepresentation of the NGE, who believe, on the contrary, that black men are "Gods" and that monotheistic religions like orthodox Islam mislead the masses by preaching belief in a "mystery god" or "spook." (For more, see my article, "Islam in the Mix: Lessons of the Five Percent" here. And for what I think will be the definitive work, look out for Michael Muhammad Knight's The Five Percenters: Islam, Hip-hop, and the Gods of New York, due out from Oneworld in spring 2007.) But other than the fact that I think that Alim is trying to force Five Percenters into a Hip Hop "umma," I think he's a fine researcher. (And I should add that when he was the editor of Black Arts Quarterly, he generously published one of my articles [vol. 7, issue 1, Spring 2002]. Go here to download the issue.)

I don't know anything about the third editor, Samir Meghelli, so here's what the book's website says: "a Richard Hofstadter Fellow and doctoral candidate in American History at Columbia University, and his work has been published in The Black Arts Quarterly [in Vol. 8, issue 1, Spring 2003--download here], Proud Flesh, and Newsletter of the Institute of African Studies at Columbia University. He has organized several public history programs throughout the New York and Philadelphia areas, as well as served as a consultant to the Museum of the City of New York for their exhibition, “Black Style Now!” Meghelli’s research interests include the history and globalization/glocalization of Hip Hop Culture, and immigration, race, and identity in France."

Be sure to check it out!

Tags: Hip Hop, Islam
Posted by Ted Swedenburg at 10:13 AM

Email ThisBlogThis!Share to TwitterShare to FacebookShare to Pinterest
Labels: hip-hop

PEACE. Yet more conceptions. Nevertheless, the truth shall be revealed. I'm going to check that book out.