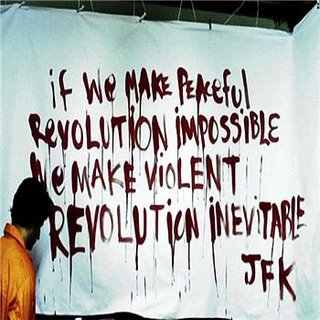 You must see this video! Watch it for free, here. Or better yet, buy it, for 1.99 pounds sterling, here . By purchasing, you support Fun-Da-Mental and get a better quality video to boot. (The image above is the last frame of the video--surprisingly, a quote from JFK.) John Hutnyk, on his invaluable blog Trinketization, analyzes the video here, situating it within the tradition of pantomime.

Here's an excerpt from John's analysis:

In the video for DIY Cookbook, pantomime characters make the argument. There are three verses. The first entails a cross-of-St-George-wearing youth constructing a strap-on bomb from a recipe downloaded from the internet. He is dressed as a rabbit and as a lizard in parts of the verse, playing on childlike toys and fears; the second verse references the Muslim scholar and the figure of the armed guerrilla as the character relates a more cynical employment as a mercenary making a ‘dirty bomb’ with fission materials bought on the black market in Chechnya or some such; the third pantomime figure is the respectable scientist discussed in RamParts by Dave, here the scientist in a lab coat morphs into a member of the Klu Klux Klan and then a suited business man, building a neutron bomb that destroys people ‘but leaves the buildings intact’.

I hope to add something to what Hutnyk says in the future...bil mishmish, as they say. For my earlier posts on Fun-Da-Mental, click on the label below (a new, cool feature).

Tags: Fun-Da-Mental
Posted by Ted Swedenburg at 11:34 AM