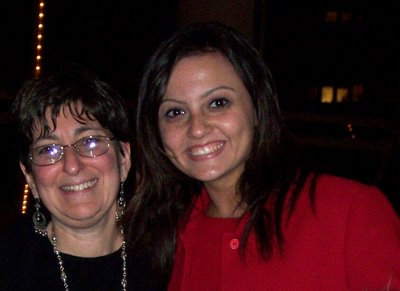 I attended the Middle East Studies Association meetings in Boston, November 18-21. On the evening of the 20th, MERIP organized a memorial event for Ahmed Abdalla, the celebrated Egyptian student leader of the 70's, who passed away on June 6. I met Ahmed in the early nineties at the house of Joe Stork. When I met him, it didn't click in my head who he was, and so I asked what he did. He responded, "professional troublemaker." Ahmed was the author of Student Movement and National Politics in Egypt, 1923-1973 (Al-Saqi, 1985), which remains the authoritative text on the subject, as well as well as numerous articles, including several in Middle East Report, such as this one.

The event was very moving, and one of the highlights was the presence of Ahmed's daughter Bushra, 25, an up-and-coming Egyptian singer and actress. I got to sit next to her at dinner and photographed her obsessively, as you can see here. Bushra makes an appearance in Michal Goldman's film, Umm Kulthum: A Voice Like Egypt--she's the cute nine-year old girl at the end who sings an Umm K. song.
Posted by Ted Swedenburg at 4:41 PM

Email ThisBlogThis!Share to TwitterShare to FacebookShare to Pinterest
Labels: Bushra

First time to me here. I am an Egyptian young man who loves Dr Abdallah and adores his wondeful sweetie Bushra. I was so happy 2 read yr post. I can see that you r interestred in the middle east, just like I do. I mean academically. I am a curious reader abt the middle east besides I used 2 live there for many years as well.