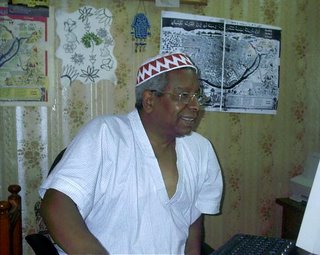 I was excited to read a review of The Anchor Book of Modern Arabic Fiction in today's New York Times. Excited because I was pleased to learn about the book, and excited because the review was very favorable. I'm always glad when Arab culture gets its props in high-profile media venues in the US. Although I've not seen the volume, I think the reviewer, Robert W. Worth (who covers Iraq for the Times) gets things right, based on what I know about the writers he covers. He praises Egyptian short story writer Yusuf Idris, Egyptian novelist Sonallah Ibrahim, and Egyptian Nubian writer Haggag Hassan Oddoul's story, "Nights of Musk," from the short story collection of the same name (AUC Press, 2005). I'm particularly pleased to see Oddoul (pictured) getting some credit, both because he's an excellent writer and because it's good for Nubian visibility. Worth also gives high marks to Sudanese novelis Tayeb Salih, and he makes the very accute observation that the stories of Egyptian writer Nawal El Saadawi's "angry rants against Muslim treatment of women...are among the few stories in the book where an author appears to be playing to a Western audience."

Here's what bugs me about the review. Worth states that "One of the best pieces here is an excerpt from 'Men in the Sun'" by Palestinian writer Ghassan Kanafani. I can't quibble, for I think that this novella is Kanafani's best work. Worth goes on to describe Kanafani as a "Palestinian advocate killed by a car bomb in Beirut in 1972." It has of course been very well known for a long time that the car bomb that killed Kanafani (and his niece Lamis) was planted by Israeli intelligence. In fact, Eitan Haber, former spokesperson and speechwriter for the late Israeli PM Yitzhak Rabin admitted Mossad's responsibility, in an article published in Yediot Aharanot last October. (See my blog entry on the subject here.) But even when Israeli terrorism is officially acknowledged and confirmed, the New York Times will not publish the fact. Too "controversial" to say that Israel engaged in targeted assassinations, I guess, even--or maybe especially?--in a review of literature.
Posted by Ted Swedenburg at 2:35 PM

Email ThisBlogThis!Share to TwitterShare to FacebookShare to Pinterest
Labels: literature

The Daughter of Isis said...

Heaven forbid anybody should say anything to disparage Israel.

I read the review today, too and I plan to pick up the book. I had the pleasure of meeting Nawal El Saadawi a few years ago at a writers forum and although I do agree with many of her angry rants, I also agree with Worth's take on her writing.

Great blog, by the way. I found it while googling my favorite phrase - "fil mishmish." Random.

Thanks for the comment on the blawg. For those of you not in the know, 'fil mishmish' means, "when the apricots bloom," in Arabic, and can mean, "whenever," or "probably never," or God knows when.

And, check out "the daughter of isis" blog, Queen of Nonsequiturs.

best arabic novel is Khonad Hamra by Haggag Oddoul .. I wonder if they translated it to english.. i hope so, cuz it is eye opening ..

oh, the man is nubian by the way .. but yeah