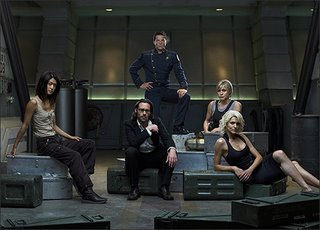 Listen to today's Weekend Edition on NPR and hear Elvis Mitchell and Andrea Seabrook discuss the new edition of Battlestar Galactica, now on the SciFi channel. What is remarkable is that suicide bombing is presented in a nuanced, not unsympathetic light, as are veiled critiques of US practices (torture, imprisonment without charge) in Iraq. I've not yet seen the show but I'm going to watch as soon as I have the chance.

I also find it curious that there has been no media outrage about this, at least none that I'm aware of. And yet, when Fun^Da^Mental put out a song ("Cookbook DIY") that compares individual suicide bombers to scientists making weapons of mass destruction for governments, Fun^Da^Mental's frontman, Aki Nawaz, is massively criticized in the media and public figures call for him to be charged for "glorifying terrorism" under Britain's new anti-terrorism laws. As Aki says, artists like Harold Pinter call Tony Blair a war criminal and say he should be tried in a criminal court, and other artists and journalists push the envelope, and no one calls for them to be prosecuted. But just let a Muslim artist get "edgy" and a hysterical, moral panic ensued. According to Aki, it's because of racism against Muslims.
Posted by Ted Swedenburg at 3:09 PM

dood, you’ll wet your pants when you hear the xo’s defense of suicide bombing as their most effective tactic. you’ll have to come to memphis for a weekend bsg bender – jane and I have been fans since the beginning and have the first two seasons on dvd.
-ryan

You know...I noticed the shift from the first season of Battlestar and the new season...at first, because the Cylons could look like humans, there was the unmistakable paranoia about "them"--Cylons could be amongst us (the way terrorists or formerly communists could be anywhere)...but in the new season, Cylons occupy New Caprica "for their own good"...and humans are resisting--including using suicide bombing....that's when I realized that "we" where the Cylons (in Iraq)...not the humans.

I watched the show last night and although the "Iraq" parallels weren't particularly in evidence, I'm now hooked. Sorry I missed it before!j

Science Fiction has always been able to get away with murder as far as its veiled commentary is concerned. That's one of the things I like about the genre.

I'd like to ask you a question or two for Meme Therapy's Brain Parade feature. If you're keen get in touch with me via email.

jose: you'll have to somehow leave your email. if you post it on comments i'll use it and then delete. not sure i know anything of use...