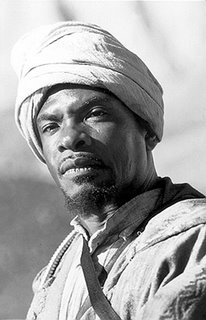 It turns out I was wrong in my post below when I wondered whether Fun^Da^Mental's song "786 All Is War" might "launch an Islamo-futurism trend?" I learned today of Yusuf Nuruddin's article, Yusuf Nuruddin on "Ancient Black Astronauts and Extraterrestrial Jihads: Islamic Science Fiction as Urban Mythology," published in the latest issue of Socialism and Democracy. It's part of a special issue on "Socialism and Social Critique in Science Fiction," and also includes articles by Steven Shaviro and Carl Freedman, among others. I look forward to checking it out.