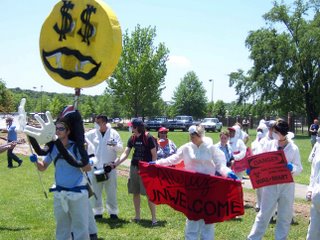 Action today against Walmart, a march from the Fayetteville High School to the Bud Walton Arena, where the annual Walmart Shareholders' Convention opened today. The police corraled us even further away from the meeting than we were in the last two years, a few hundred yards away. This was a nationwide action, aimed at declaring Walmart a threat to public (health, labor, environmental) safety. Our action was small, maybe 30-35. All the local newspapers, all the businesses, are united in welcoming Walmart--the influx of thousands of shareholders is a big boon to local merchants, restaurant and hotel owners. Even liberals, in this liberal town, are reluctant to stand up, in public, to criticize Walmart. Hopefully, other actions elsewhere in the country were larger. More photos can be viewed on my flickr account.

Read reports of the 26 quarantine actions that took place throughout the country here.