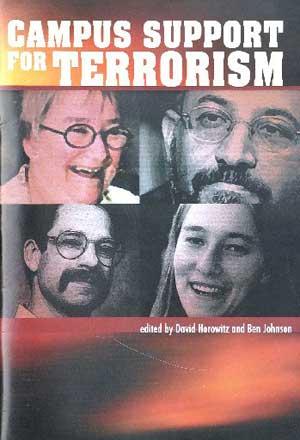 I caught this from The Angry Arab: Joel Beinin has sued the book publishers of David Horowitz's new book, Campus Support for Terrorism, for using his photo (he's on the lower left) on the cover. An article in the San Jose Mercury News quotes David Horowitz as stating that Beinin "supported terrorism," along with other typical Horowitz lies and distortions.

Some academics think it's a kind of honor to show up on Horowitz's various lists, but I disagree. It's McCarthyism, it's dangerous, and at the least, it's a horrible nuisance to be targeted by him.

Beinin would like people to think he is suing Horowitz for accusing him of being a terrorist. That's false. In fact Horowitz is being sued for copyright infringment. What ever is true or not about Beinin has not bearing on that decision. More here.