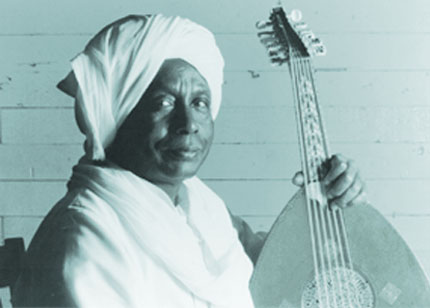 Hamza El Din passed away yesterday, May 23, of complications from brain surgery, at Alta Bates Hospital in Berkeley. I'll post more details if/when I get them.

Hamza was a giant of Nubian music, whose career spanned over four decades. I did a slide show/talk at University of Pennsylvania in December 2001, which was followed by comments and discussion by Hamza. Hamza started by saying, "I'm the one who wrecked Nubian music." He went on to explain that before him, traditional Nubian music consisted of singing to the accompaniment of the tar or frame drum, and sometimes the kisr or lute. Hamza was the first to set Nubian songs to the backing of the 'ud. Hamza moved to the US in the early '60s, and was a fixture on the US folk music scene, playing clubs in the Village. His first two albums were released on Vanguard, the leading folk label of the time. Hamza worked as an ethnomusicologist at the University of Texas and the University of Washington, and he played at Woodstock in 1969. He was friends of the Grateful Dead and used to play concerts with them, and played at the Pyramids in Cairo with the Dead in 1978. He later moved to Japan where he resided for a number of years, studying Japanese traditional music. I saw him perform in Cairo in 1994 (I think) with a group of traditional Japanese musicians. I also got to know him and hang out with him a couple of times, courtesy of my advisor, and Hamza's old friend, Bob Fernea.