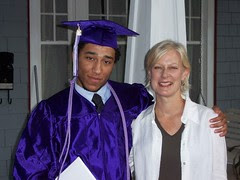 My son graduated on Saturday, and here he is, after commencement, with his mom. (The purple cord indicates he graduated with honors.) Besides the fact that I enjoyed the ceremony because I was proud of my son, the commencement keynote speaker was the best I've ever heard. Dr. Robert Neralich, humanities teacher at Fayetteville HIgh (and Evan's Asian Studies teacher), spoke in favor of controversy, and managed at the same time to create some controversy. At various points people booed, one person yelled, "get off the stage," and there was also a lot of cheering and clapping. Neralich started by taking aim at the U of A: "Many of you are aware that a professor at the UA [Kabin Thomas] was recently dismissed from his teaching post. I was appalled by his statement that one reason for his firing was that his administrative superiors [my Dean] did not approve of his unorthodox teaching methods and preferred faculty members who were not controversial. As a teacher, I am profoundly distressed that the term 'controversial' can be rendered so readily in a negative sense. When I think about controversial people, the names that occur to me constitute many of the world's greatest benefactors." Would that there were more Neralichs teaching students like my son.

Wow. Neralich is probably the most influential teacher at Fayetteville. All my hometown first years in Intro couldn't stop talking about him.

And it's such a shame to hear about Kabin Thomas--I like him a lot, and I was even a chorus member in the famous Middle-Eastern Voice/Tuba Ensemble of 1999.