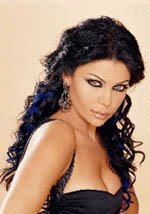 What I reported as a rumor earlier now seems to be really happening. Both 50 Cent and G-Unit list a concert in Beirut on June 10th on their websites, and a friend of mine who just arrived in Beirut says yes, it's happening. If she goes, I'll try to get a report. Majnun!

Of course, Beirut has long hosted touring acts from the West, most notably at the Baalbek Festival. I saw Miles Davis & Co. perform at Baalbek in the summer of 1973. This was the Miles of the On the Corner era. It was funky and crazy and one of the most amazing concerts I've ever attended. (And the setting: the Roman ruins of the Temple of Bacchus.) I also saw Stockhausen perform in Lebanon, at the Jeita Caves. What's notable about this concert is that a major Lebanese artist is performing along with the touring US rap stars. Have the cultural power dynamics shifted, just a bit?