This is a gorgeous and moving set of photos of Gaza surfers from Andrew McConnell. There are 23 surfers there who own boards, and other surfers who borrow when possible. Supplies are impossible to get in, so international donors have helped supply boards and wetsuits. But the surfers have no wax, so they improvise. This photos shows them melting candles on their boards before they head out onto the beach. 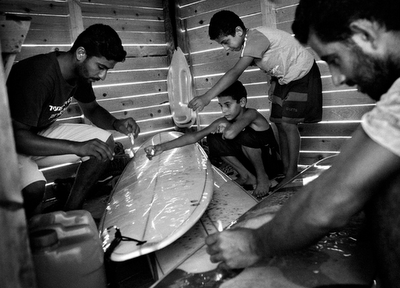 You wonder whether the Gaza surfers know that surf music was invented by the Lebanese-American guitarist Richard Mansour, who recorded under the name of Dick Dale.

As Dale told George Baramki Azar, "My music comes from the rhythm of Arab songs," he says. "I applied the beat of the darbukkah (fluted drum) to my guitar. This is where a lot of great surf motifs originated."

Probably Dale's most famous song (due to Pulp Fiction) is "Misirlou," which is based on a Greek song (the title, meaning "Egyptian Muslim Girl," comes from the Arabic for Egypt, Misr) that was popular in the Arab-American community since at least the 1930's, and has been recorded in multiple versions. The song emerged from the rebetika tradition, forged in Smyrna, one of the Ottoman Empire's great cosmopolitan cities, which was emptied of its Greek population in the disastrous "population exchange" between Greece and Turkey that occurred after the First World War. Wikipedia has an excellent account of the song, its history, and its multiple versions. This excellent blog posting discusses the song and offers downloads of a number of versions, including one of Dick Dale.