Writers: get up, stand up (for 2 minutes) 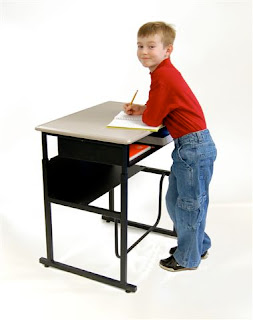 In an inspiring study being published next month in Diabetes Care, scientists at the Baker IDI Heart and Diabetes Institute in Melbourne, Australia, had 19 adults sit completely still for seven hours or, on a separate day, rise every 20 minutes and walk leisurely on a treadmill (handily situated next to their chairs) for two minutes. On another day, they had the volunteers jog gently during their two-minute breaks.

When the volunteers remained stationary for the full seven hours, their blood sugar spiked and insulin levels were out of whack. But when they broke up the hours with movement, even that short two-minute stroll, their blood sugar levels remained stable. Interestingly, the jogging didn’t improve blood sugar regulation any more than standing and walking did. What was important, the scientists concluded, was simply breaking up the long, interminable hours of sitting...

So every 20 minutes or so, I now rise. I don’t have a desk treadmill; my office is too small, and my budget too slim. But I prop my papers on a music stand and read standing up. I prowl my office while I talk on the phone...

I run for three or four miles most days, too, and grunt through 20 push-ups most mornings.
Posted by Ted Swedenburg at 12:14 PM