The world's gone mad, the world's gone drag. Boys in their little sister's jeans like DAMN!!!
"Skinny Jeans (The World's Gone Mad)" is a kind of old-skool attack--or maybe better put, a satire representing a particular vision of old skool--on the new male style trends associated with the "jerk" scene, and in particular, the skinny jeans. (Thanks to Wayne Marshall to telling me about this vid.)
The Protracktorz and The Incomparable Shakespeare deploy a number of rhetorical strategies to put down the skinny jeans. They associate it with drag (i.e., homosexuality), with effeminity (sister's jeans), and with other purportedly unmanly fashions: to wit, pashmina scarves (which are really kufiyas) and plaid shirts.
Pashmina scarves, plaid shirts, oh no.
The skinny jeans and associated styles are also associated here with "boys" as opposed to men, with styles worn in 5th grade, with accessories like the man purse, with posing.
The "news broadcast" that interrupts the vid presents a number of femme-sounding synonyms for tight jeans: slimmies, thigh riders, hip handlers, bootie huggers, denim with spandex or mandex, soccer pants, butt wranglers.
Added to this is that the male models are made to look decidedly "unmanly" in the "American Idle" spoof that is the vid.
This model has nerdy glasses, is "too" light in skin color, and sports the offending pashmina/kufiya and the plaid shirt. Which of course don't match. Not to mention the skinny jeans. 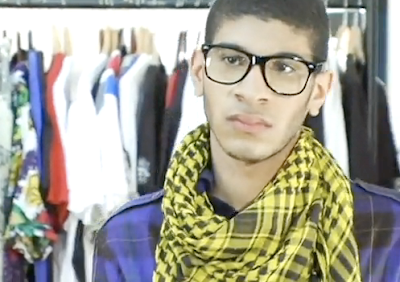 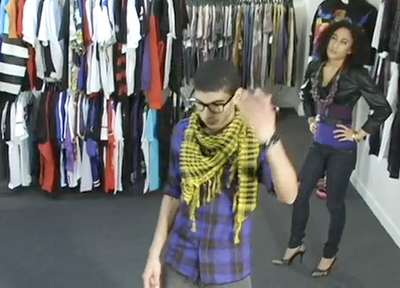 This male model is at least a bit darker in skin tone, but he wears a pink shirt, with the image of girl on it, and that of course immediately makes him suspect. As does that strangely colored hat. The nerdy glasses don't help either. The cute shop assistant is impressed by neither of these dudes.

When you see the vid, you also notice that an important part of the objection to these styles (skinny jeans and pashminas/kufiyas and [maybe?] plaid shirts) is that they are also associated with white hipsters. What could be more hipster than skinny jeans and kufiyas?!

Wearers of skinny jeans, in sum, are damned for being girly, adolescent, associated with whiteness.

As opposed to the real, authentic black men who are mocking and protesting against the tight jeans. The homophobia here is scarcely veiled.
What this is all about is a cultural phenomenon associated with a dance music known as jerk, that hails from LA, that is very much a teen phenomenon, and that is very much about the skinny jeans. The band most famously associated with jerk, the New Boyz, have released an album called Skinny Jeans and a Mic. Check out the vid for their song, "You're A Jerk."
The video gives you a good sense of how fun and energetic the jerk scene is. How it resembles original hip-hop, in that it is not merely about rapping, but also about a style of dancing and a sense of fashion and a location in the street. Guy Trebay's lively and compelling account of jerk is here. 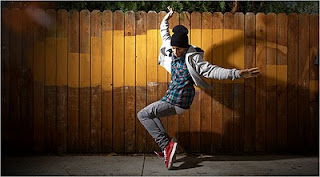 Stephanie Diania, New York Times
And notice that no one in the vid looks anything like the male models who are spoofed in the Protracktorz video. The "jerk" kids look like hip-hoppers, but with tight jeans. There are no "pashminas" or plaid shirts in sight.
I was recently in Philadelphia, and I did see a lot of twenty or thirty-something African-Americans wearing kufiyas. They weren't teenagers from the jerk scene. But neither were they slavishly imitating white hipsters, although there were certain stylistic commonalities. Kufiyas have been around in the black communities since the '70s, and are not signs of unthinking adoption of "white" style.
New Boyz defend the skinny jeans style here. They argue that it's not novel, that it's a style that was big in the West Coast and East in the 80s. "A lot of the people who are hatin' on you are people who are scared of change."
The Protracktorz are just jealous old guys, worried that something new is up that they don't get, something that it is going to pass them by. They don't understand jerk at all. Or kufiyas either.

And for Wayne's exhaustive(ing) archive of items on skinny jeans, go here. (How does he do it? Is he super-human?)
UPDATE: April 6, 2010. Please see comment one. I completely missed the point that this vid is a spoof of narrowminded and conformist views within hip-hop towards new phenomena. Damn. I apologize to The Incomparable Shakespeare. Now I love the vid even more.
Posted by Ted Swedenburg at 12:07 PM

I appreciate your analysis and dissection of the video and song. I will say that for 1, the song is not homophobic... AT ALL!! Secondly, I love Hip-Hop too much to knock any sub cultual movements like the Jerking scene even if I don't participate in it. I think most people don't understand that the video is satirical. Furthermore, when it does make statements, they are lost because people feel targeted. "American Idle" and "Mox 5" are explicit examples of this point. Honestly, the point of the video was to poke fun at this cultural acceptance of uniformity in Hip-Hop. I was just as disappointed by the whole oversized "white t"/ super baggy jeans thing or "I'm a trapper" movement. Hip-Hop has always been predicated on individuality and self expressions and we're progressively seeing less of it. Thanks again for your opinion, and hopefully you haven't written me off as an artist based on the video. Here's a link to my new project: http://www.djbooth.net/index/mixtapes/entry/silver-the-incomparable-shakespeare-the-british-invasion

Dear Incomparable Shakespeare, thanks for your comment--I totally missed the satire. If that's the point, then I completely revise my opinion of the vid. I am just now downloading the mixtape, and i look forward to listening.

I appreciate you keeping an open mind and hearing my perspective. I hope all is well, and when you do listen to the "British Invasion", I'd love your opinion. Later