"The Taqwacores" to screen at Sundance! Trailer now available on MTV! 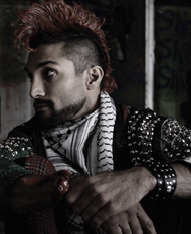 Check out this terrific trailer for "The Taqwacores," courtesy MTV. It will screen soon at the Sundance Film Festival. Five chances to view it between January 24 and January 29. The Kominas will be there.
This makes me even more appreciative of Sundance, which screened Slingshot Hip-Hop, Jackie Salloum's film about Palestinian rap, in 2008.
Will Quentin Tarantino show up for an after-party, as he did for Slingshot?
Big congrats and mabrouk to all concerned, and particularly to Michael Muhammad Knight, the author of the novel The Taqwacores. And many other books, which all readers of this blawg should purchase and read. (Confession: I'm one of the inhabitants of Knight's Blue-Eyed Devil: A Road Odyssey Through Islamic America. It's cool to be part of MMK's vision of Islamic USA.
And of course, there are kufiyas, in the film, and in the trailer. This guy is the "West Coast Punk." From the trailer, it appears that he will be a quite interesting and provocative character in the film. 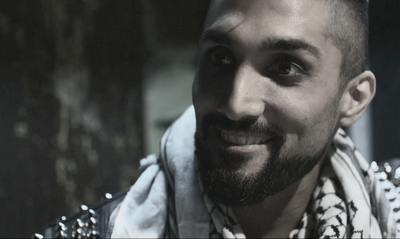 But the Riot Grrrl and the Queer Punk look promising too, eh?
Posted by Ted Swedenburg at 11:40 AM

"Confession: I'm one of the inhabitants of Knight's Blue-Eyed Devil: A Road Odyssey Through Islamic America. It's cool to be part of MMK's vision of Islamic USA."
Heh, that's how I found this blog---and realized there were progressive Muslims up in NW AR. I'm hoping that the Taqwacores comes to the local indie cinema here in LR; the trailer makes it look like it stayed true to the feel of the book.

@mamaspeak: i think michael tries his best to make this movie stay true to the book. if you have a chance to read michael's last book "journey to the end of islam", especially in the second part, under the heading "el-hajj azrael wisdom" you will find michael's account on the production of the movie. i'm also expecting to see the movie here in fayetteville. well, i hope dr. swedenburg's connection with michael will get the movie here soon :D.