I ran across this article on Lebanese rap from the Christian Science Monitor only recently. It gives the great Rayess Bek his props as the godfather of Lebanese hip-hop. (If you click on the link, you can listen to some of his terrific new tracks.) It also discusses other artists, some of whom I knew little about: RGB, Malikah, and Katibe 5, who are from the Palestinian refugee camp Burj al-Barajneh. (And about whom I've posted previously, on my mepop blog.)

OS Loop [of Katibe 5] recalls a concert American superstar 50 Cent put on in Beirut in 2006, before the Israeli bombardment of Lebanon that killed more than 1,200 Lebanese. A native of Queens, New York, 50 Cent often raps about how he survived being shot nine times. But OS Loop isn't overly impressed with that – or the commercial turn that 50 Cent's music has taken.

"Now Snoop is coming, and Akon is coming [to Lebanon], but for me they are all commercial," he says. "I wish 50 Cent stayed in Lebanon for the war," he adds with a laugh. "I wanted to tell him what's the true meaning of gangsta."

And check this out, from Jon Lee Anderson's recent New Yorker article, "Letter from Tehran," which focuses on Ahmadinejad.

When President Khatami took office, in 1997, he removed [Ahmadinejad] from the governorship [of Ardabil], and Ahmadinejad returned to his old university [Iran University of Science and Technology] to teach. He received a Ph.D., in traffic management, that year.

“At the university, Ahmadinejad was very active in the Basij organization, and when the reformists came to power in 1997, with Khatami, he used to make problems for the professors and come to class with a kaffiyeh, to show his solidarity with the Palestinian cause,” [Nasser] Hadian [professor of political science at Tehran University and childhood friend of Ahmadinejad] said. 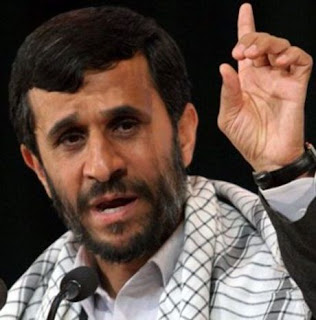 Let's tease this out a bit: the holocaust denier, using his kufiya as a sign of solidarity with Palestinians, as well showing that (a) he's down with the paramilitary Basij, who function among other things as a kind of morals police, and (b) is politically opposed to the Khatami-led reformist movement. Palestinians really need friends like this...

Overall, Anderson's article was informative, but given that Dennis Ross is Secretary of State Clinton’s special adviser on Iran, I'm rather more nervous about the prospects for US-Iran diplomacy than Anderson. (Ross, as is well-known, tilts too close to the Israeli position on Iran.)
Posted by Ted Swedenburg at 1:35 PM

Palestinians, not Arkansans, get to decide who their friends are. They chose people like Ahmadinejad because they are assholes. That, Ted, is also why no one really cares when they get killed.