back on the kufiyaspotting tip: "Hipster: The Dead End of Western Civilization"

Yes, clearly I've not been blogging much lately. I have to attribute it to what seem like the very high demands of teaching this semester. But I've been collecting kufiya info, and it's time to start reporting. So here is the first of several posts which I hope to spit out over the next couple days.

One of my undergraduate students turned me on to this article yesterday,"Hipster: The Dead End of Western Civilization," by Douglas Haddow, from the latest issue (79) of Adbusters.

Here's the last paragraph of the article, which sums up the thesis and conveys the mood of the piece:

We are a lost generation, desperately clinging to anything that feels real, but too afraid to become it ourselves. We are a defeated generation, resigned to the hypocrisy of those before us, who once sang songs of rebellion and now sell them back to us. We are the last generation, a culmination of all previous things, destroyed by the vapidity that surrounds us. The hipster represents the end of Western civilization – a culture so detached and disconnected that it has stopped giving birth to anything new.

The article contains a couple of kufiya (keffiyeh) references--kufiyas, according to Haddow, are one of the key distinguishing signifiers of today's hipsters, as well as being symptomatic of the emptiness and meaninglessness that typifies the hipster subculture.

Take a stroll down the street in any major North American or European city and you’ll be sure to see a speckle of fashion-conscious twentysomethings hanging about and sporting a number of predictable stylistic trademarks: skinny jeans, cotton spandex leggings, fixed-gear bikes, vintage flannel, fake eyeglasses and a keffiyeh – initially sported by Jewish students and Western protesters to express solidarity with Palestinians, the keffiyeh has become a completely meaningless hipster cliché fashion accessory.

The kufiya: the quintessential sign of the vacant character of contemporary youth culture!

The kufiya comes up again, at the end of Haddow's article, in his description of a bunch of urban hipsters making their way home at dawn, after the after-parties:

The half-built condos tower above us like foreboding monoliths of our yuppie futures. I take a look at one of the girls wearing a bright pink keffiyah and carrying a Polaroid camera and think, “If only we carried rocks instead of cameras, we’d look like revolutionaries.” But instead we ignore the weapons that lie at our feet – oblivious to our own impending demise. 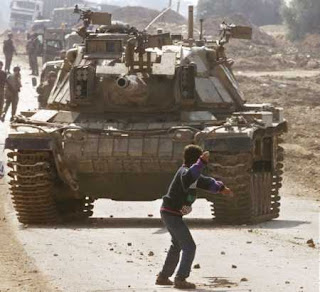 Hmmm...you'd look like revolutionaries whay exactly? Because of the kufiya and the rocks? Like this kind of revolutionary? (A young Palestinian confronting the army of occupation.) Who would hipsters be throwing rocks at? Who would be driving the tank? Or would you just be throwing rocks at your "yuppie futures"? Maybe it would be better to forget imagining that one could look like a revolutionary, and join demonstrations against the $700 billion dollar bail-out or send money to the US Campaign to End the Israeli Occupation.

I'm not sure that the kufiya hipster signifies the end of Western civ either. Hipsters or bohos or whatever you want to call them were wearing kufiyas for style reasons back in the early to mid-eighties. And hip youth culture as now being about "consuming cool rather that creating it" (Haddow)--this isn't particularly new either. It's all well and good to critique hipsters wearing uniforms, not knowing the provenance or politics of their kufiya gear, and fooling themselves about the subversiveness of their style and attitude. But it's not the end of the world.

(Excellent hipster kufiya photos are to be viewed at Hipster Intifada.)
Posted by Ted Swedenburg at 7:58 PM

Don't miss Paste Magazine's "The Evolution of the Hipster" spread replete with Kufiya on Ms. 2005.