The Last Kufiya Factory in Palestine

The article reproduced below, by Benjamin Barthe, appeared in Le Monde on February 20 (p. 7), with the title,"Mort annoncée du keffieh 'made in Palestine,'"and--translated into English--on March 14 in the Manchester Guardian Weekly (p. 31). And also check out this article from the Daily Telegraph (January 21), that also covers the threat to Hirbawi's factory. It has a useful photo gallery featuring kufiya wearers in Palestine and in the West (Colin Farrell, Beckham, and Sting).

As the kufiya has taken off in popularity in the West, the beneficiaries have not been Palestinian producers. Palestinian kufiya manufacturers have been getting wiped out of the market, due to a combination of factors: its growing international popularity, since at least the '80s, has inspired other producers, most notably Chinese manufacturers, to join the fray; the lack of protective tariffs for Palestinian producers--the Palestinian Authority has no "authority" to impose import duties, or really to impose much of anything; and the myriad Israeli checkpoints in the West Bank, which have ground economic activity to a virtual standstill.

I have a very nice kufiya, made in Hebron, which I bought in the West Bank in 1984, and is of much finer quality than any I've seen since, in the West or in the Middle East. Hopefully it's not too late for me to find another good one when I'm there this June. 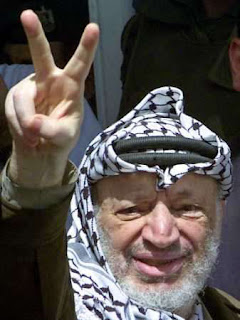 Yasser Hirbawi, 78, takes us slowly round the factory, that he has directed for 45 years in Hebron, on the West Bank. In the early 1960s he imported 15 machines from Japan but only four are still running.

His firm is the last manufacturer in the Occupied Territories still weaving the traditional black and white keffiyeh worn by Palestinians. "Competition from Chinese textile products killed my business," he says with a sigh.

In its heyday the Hirbawi family factory produced almost 150,000 units a year. The boom owed a great deal to the Palestine Liberation Organisation's fedayeen and above all to their leader, Yasser Arafat, whose headgear was synonymous with the liberation movement. "All the people throwing stones during the first intifada felt obliged to wear a keffiyeh," says Hirbawi.

In the 1990s the Holy Land's popularity as a holiday destination boosted sales. But 10 years later, with China's economic growth, increasing deregulation of trade and the start of the second intifada, sales plummeted. Locally produced scarves were more expensive than imports, added to which Israeli checkpoints delayed deliveries. 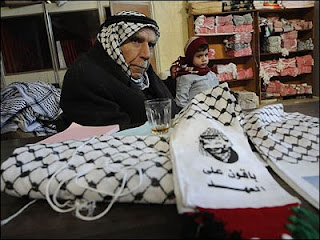 Photo of Hirbawi (from the Daily Telegraph)

"The whole textile trade collapsed in just a couple of years, says Tareq Souss, the head of the Palestinian garment industry. "Our government, which has no control over the borders, was quite unable to cope with the massive influx of Chinese products."

Two other factories are closing. The Hirbawi business is just ticking over, producing 15,000 units a year with a handful of staff. "Even the scarves marked 'Jerusalem Is Ours' that Fateh handed out earlier this year were from China," Hirbawi's son, Izzat, grumbles.

Hirbawi is still hopeful, convinced that higher import duties could rescue his business. But his son's look of resignation suggests that Palestine's last keffiyeh factory is unlikely to outlive its founder.
Posted by Ted Swedenburg at 5:10 PM

how do i get in touch with the hirbawi factory? i'd like for my organization to order palestinian kiffiyas. fs

so would I - if you can help at all please email me - ladycruise@mac.com

Hello
we did the same and searching in the net we called them at 00970 599 297028. They are very kind and nice people. here is their mail:
kufiya-hirbawi@hotmail.com