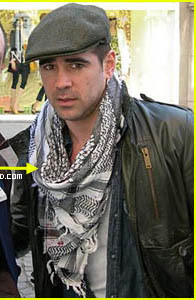 I finally tracked down a photo of a kufiya-clad Colin Farrell--tipped off by a story in the Palestine Chronicle. 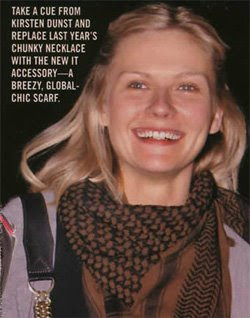 Kirsten Dunst shows up in a kufiya too, on the pages of Teen Vogue, which calls her scarf choice the new "it" accessory: "breezy, global chic." 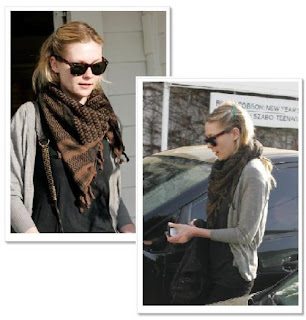 A friend has seen a photo of a kufiya-wrapped Janet Jackson in a gossip mag, but I can't find it. And now that it's summer...kufiyaspottings may be somewhat more rare. We'll see whether the trend continues as fall sets in and people begin to need scarves once again. Perhaps the trend will be helped by the fact that the kufiya (as restyled by Nicolas Ghesquière for Balenciaga) was declared by W's Meggan Crum to be one of Fall 2007's Top Ten Accessories. Check it out: "an eclectic printed scarf trimmed with vintage-style coins," part of Ghesquière's "street-smart, global mix," modeled by Brazilian supermodel Flavia de Oliveira. 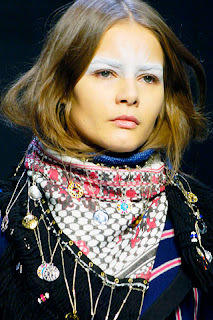 Meanwhile, check out this cheeky chronology of the "keffiyah craze" from KABOBfest.

If anyone understands Swedish, I was interviewed yesterday for a show on the "kufiya craze" that will be broadcast soon on Swedish National Radio. Will post details when I learn them.
Posted by Ted Swedenburg at 10:16 PM