Thanks to Tom, I've now located a photo of Beckham in a kufiya. These things have now become quite the thing in the UK. (A forthcoming article in the New Internationalist provides more details.) 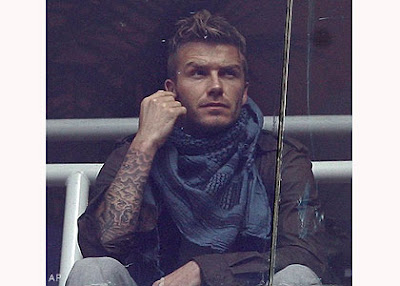 Urban Outfitters in the UK markets the black-and-white one as the "Shemagh Scarf" at 15 quid for women and 6.99 for men, and in pink and purple, as the "Heart Woven Desert Scarf." 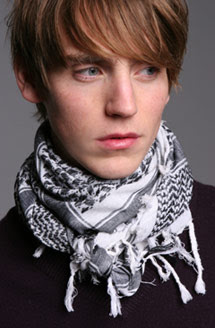 According to the online catalogue, "The Shemagh scarf has been given the girly touch. Now in pretty colours and decorated with hearts, it won't provide you with much camouflage in the desert, but it sure is pretty." And 9.99 quid. (If you look close, you can see the hearts. But it's also got the distinctive kufiya checkered pattern too.) 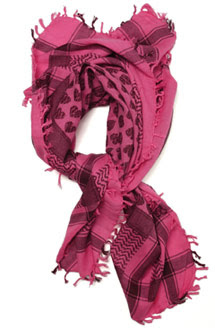 Meanwhile, Topshop (known lately for its Kate Moss line) is marketing them as "Tablecloth Scarves," in purple (for 12 quid). 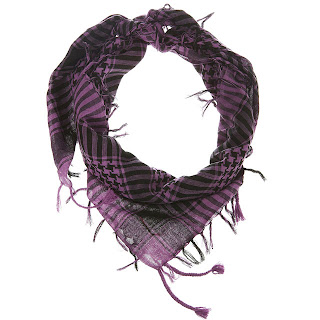 And just to show you how different the political atmosphere in the UK is when it comes to Palestine, tycoon Philip Green paid 60,000 pounds at an auction for the Palestinian charity Hoping Foundation for a kiss with Kate Moss--but then gave the chance to kiss to Jemima Khan. The event netted 200,000 pounds. Other donors included Hugh Grant and Imran Khan; attendants included Jerry Hall and her sorta stepdaughter Jade Jagger--whose own mom is pretty radical. 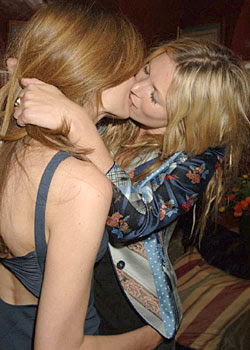 Kate (along with Elle McPherson and Jemima Khan) was also in attendance on June 21, when Elton John netted $200,000 for the Hoping Foundation, getting paid to sing Elvis' "Are You Lonesome Tonight?" Nick Cave, Shane McGowan, Mick Jones, Lulu, Chrissie Hynde (backed by Jeff Beck on guitar) and Bryan Adams also sang at the event, which raised $700,000 for Palestinian children. 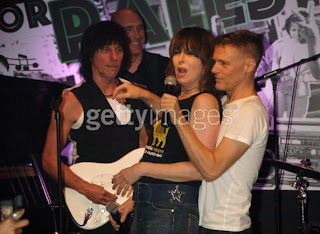 Palestinian children really need this help. Where are the Jeff Becks and the Chrissie Hynde's of the US? (Or maybe it's that we don't have a Karma Nabulsi to organize events like this?)

I'm on the hunt for photos of Colin Farrell, Nicole Richie, and Cameron Diaz, who have also been spotted in the kufiya according to this article in the Palestine Chronicle.
Posted by Ted Swedenburg at 10:24 AM

I'm not so sure every penny of that 700,000 will go to the children who need it. How can we know its not being spent on other things, like home cliterodectomy kits . . .

I know Karma Nabulsi and I'm sure all the money goes to children. Plus, cliterodectomies are NOT performed in Palestine.