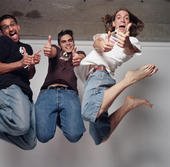 So have you seen the comments where the punker than thou crowd are dissing the Kominas for "selling out" to MTV???