Adam Shatz, "The Drift towards War," on the LRB Blog.

Over the last few years, Israel has carried out hundreds of strikes inside Syria, mostly aimed at Hizbullah military convoys suspected of transferring advanced weapons into the Bekaa Valley. In February, however, after intercepting what it claimed to be an armed Iranian drone in its airspace, Israel struck for the first time at Iranian targets, killing at least seven members of the Quds Force, the external operations unit of the Iranian Revolutionary Guard. The possibility of an Israeli-Iranian war is now higher than it has ever been, since Iran feels encircled, and Israel believes that it has a green light from Washington for further military adventures.

When the US invaded Iraq fifteen years ago, it did not do so accidentally -- we were led there: first and foremost by the neocons who wanted war at any cost; and secondly, by a liberal media that was all too willing to create the fog that made the war possible. There are salient differences between now and then. In 2003, one could plausibly make the argument that US war policy was not driven by Islamophobia and the most toxic forms of Zionism. Not so this time. By this stage in 2003, we had gone out in the millions to protest. We haven't even begun to do so yet.

The fog bank is rolling in again this week, bringing with it mass human suffering.

Do not think of it is a natural event. It is entirely man-made. It's what happens when a blast of neocon will-to-power hits the hot, moist air of liberal humanitarianism.

And do not think that this fog emanates from distant places "over there" in Syria. This fog is an entirely local meteorological phenomenon, designed to prevent only Americans from seeing things for what they are. It will not impact weather or vision in other parts of the globe. 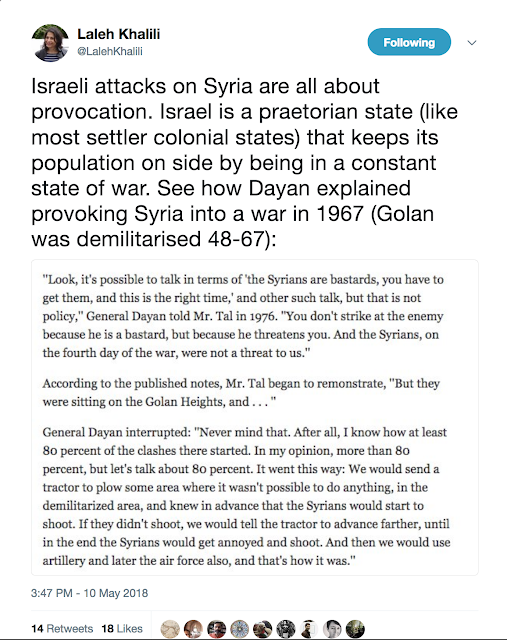 To which I add: I met an Israeli in 1971, in New York City, who told me that he grew up in an Israeli community very close to the Syrian controlled Golan Heights and that he never felt under threat, at least prior to spring 1967. And as Dayan clarifies, the reason for shooting in the area was Israeli provocation.