I first saw Qalandia (Kalandia) refugee camp in December 1961, on my first visit to the "Holy Land," with my family, when we flew into Jerusalem and landed at Qalandia (Kalandia) airport. When I did fieldwork in Palestine/Israel in 1984-85 I drove by it, on my way between Ramallah and Jerusalem, multiple times. I saw it again many times, between Ramallah and Jerusalem, on research trips in the summer of 1992 and again in 1993. In summer 2008, my last trip, I waited for long periods at the checkpoint, which is the site of a huge Israeli checkpoint that controls travel between East Jerusalem (annexed by Israel in 1967) and the West Bank. It is an awful ugly edifice, that looks like it belonged at an international border. (It's not, since the Palestinian authority enjoys no sovereignty, and there is no Palestinian checkpoint checking passes/passports after you leave the Israeli checkpoint.)

Here's my photo of the checkpoint, and here's one of the separation barrier/apartheid wall at Qalandiya.

As for Qalandiya camp, I don't think I ever actually visited it, just viewed it from the outside. But I've had many many views between 1961 and 2008. The camp has been there since 1949, to house refugees who fled the fighting and expulsions of 1947-48, and today has around 11,500 residents. It has been in existence for 65 years.

I have just read a very fine New Yorker review of the current New Museum exhibit of contemporary art from or about the Arab World, by Andrea K. Scott. What really struck me was this photo, of Wafa Hourani's piece "Qalandia 2067." 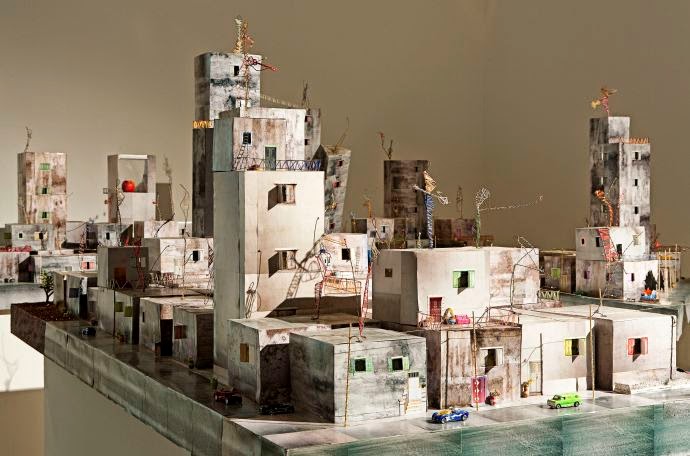 Scott describes it as follows: “Qalandia 2087,” [in fact it's 2067- TS] an elaborate architectural model by the Ramallah-based Wafa Hourani, reimagines a Palestinian refugee camp as a utopian zone of playgrounds, cafés, and landscaped courtyards—there’s even a glitter-paved aquarium, stocked with fish.

Fair enough, this seems a plausible enough reading, and I don't want to be too hard on Scott here, as her review of the exhibit as a whole is very favorable and very smart.

But notice the date in that title, and imagine what a Palestinian artist is thinking when he imagines that a refugee camp that was established 65 years ago will still exist 53 years hence.

If you consult the page for Hourani's "Qalandia 2067" exhibit at London's Saatchi Gallery, however, you will read the following:

Qalandia 2067 takes its name from the main check point crossing through the West Bank Security Fence which divides the cities of Ramallah and ar-Ram; it is a site of political unrest and human rights concerns. Dating his piece 2067 – one hundred years after the Arab-Israeli 6 Day War – Hourani has constructed 5 scale models envisioning the future of a refugee camp where time seems to have regressed rather than evolved. Basing each segment on an actual site – the airport, border crossing, and 3 settlements – the buildings are rendered as war-ravaged and crumbling, crowned by implausibly archaic remnants of TV antennae. Each building is a miniature light-box illuminating glimpses into the private lives of the residents through film strips placed in the windows, an unnerving reminder that this science fiction horror is, for many, an everyday experience.

In fact, I think both readings hold. Yes, Qalandia is a "horror" for its residents, due to circumstances, and at the same time it is where people manage to make a life and homes for themselves and manage to persist despite the ongoing, seemingly endless, displacement and occupation and oppression.

Check out these photos of the exhibit, from the Saatchi exhibit (and there are more to view at the link above): 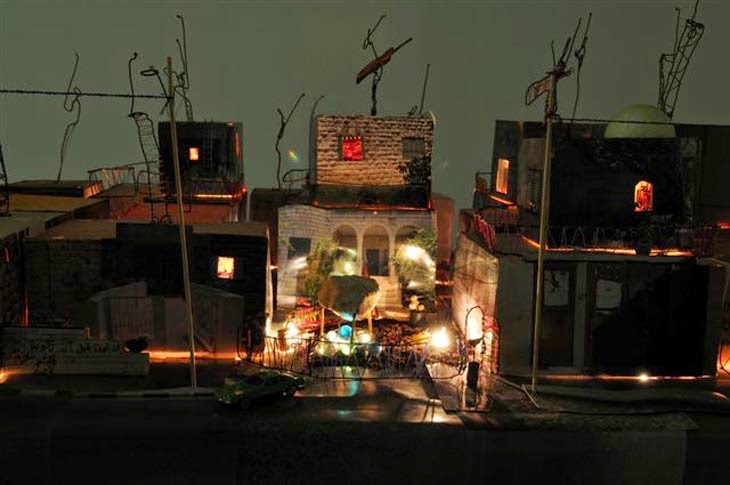 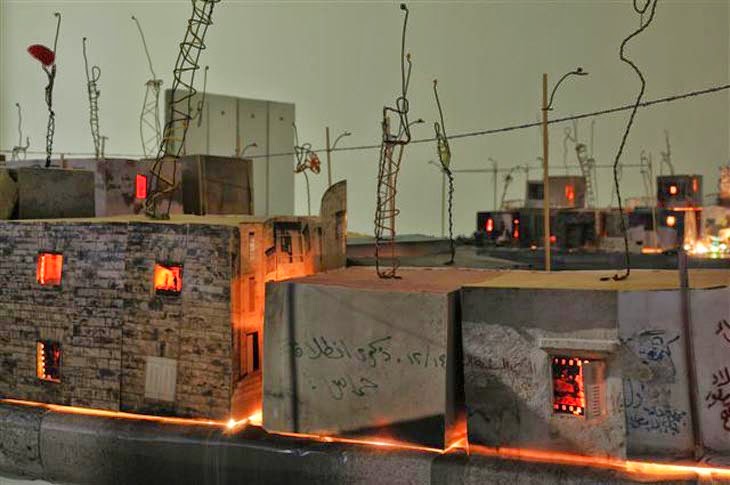 Remarkable, no? I sooooo wish I could make it to this exhibit.

Posted by Ted Swedenburg at 2:33 PM

What a pile of inanity this site is. Nothing but whining about "apartheid"*, evil Jews. You should get your head out of your ass before some jihadi cuts it off.


* Hey genius, how is there are muslim arabs in the Knesset, 20% of Israel is muslim, and yet if there's ever a PA state THEY WILL ALLOW NO JEWS TO LIVE THERE? And Jews can't travel to half the muslim "nations".