I've been watching the new AMC show "Mad Men" pretty faithfully, in part because I like the way it depicts gender relations in the early '60s.

I was struck by something in the latest episode (8), "The Hobo Code." Don goes to meet his on-the-side girl Midge and her beatnik friends at a flat (probably somewhere in the Village). They all smoke pot and listen to Miles Davis. Here's the thing, one of the guys is wearing a fez--green, I think. So now I'm dying to know whether this is "accurate" (the show prides itself on its scrupulously faithful attention to details of setting and costuming).

So, was the fez part of "hip" beatnik gear? Where did it come from? Surely not the Shriners--the epitome of un-hip. 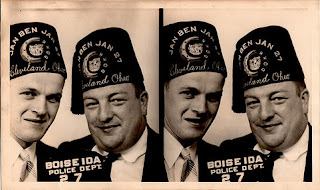 I seem to recall photos of bebop artists wearing fezes, and then of course there's the Moorish Science Temple founded by Noble Drew Ali (pictured above), which was gaining white bohemian adherents in the fifties (see Peter Lamborn Wilson's Sacred Drift, p. 49).

And then there are Matt Groening's beloved Akbar and Jeff of Life Is Hell.

Stay tuned. Maybe I need to start a "fezspotting" series?
Posted by Ted Swedenburg at 12:21 PM

In the 2004 global-warming disaster movie "The Day After Tomorrow," Dennis Quaid, our heroic climate scientist, is shown in one of the early scenes delivering a paper at an international climate conference. The members of the Egyptian delegation are wearing fezzes.