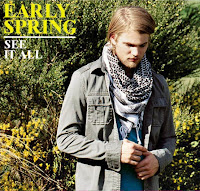 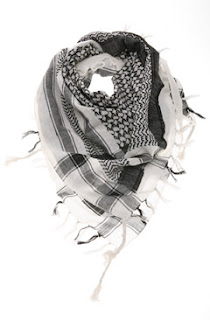 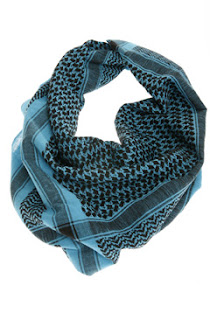 URBN has already pulled the "Anti-war woven Scarf" from the catalog.

I'm not surprised they pulled it, since Kufiya's make you look like a radical chic douchebag.

For some years, the wearing of the keffiyeh has been almost ubiquitous amongst British soldiers, who exclusively refer to them as shemaghs. Their use by the British Army dates back at least to the Second World War when Special Air Service troops, amongst others, wore them while operating in the deserts of North Africa. After the war, their use by the Army continued with the keffiyeh being worn in both desert and temperate environments in theatres such as Dhofar. Since the beginning of the War on Terror, these keffiyeh, usually cotton and in olive drab or khaki with black stitching, have been adopted by US troops as well. Their practicality in an arid environment, as in Afghanistan and Iraq, explains their constant popularity with soldiers. Soldiers often wear the keffiyeh folded in half into a triangle and wrapped around the face, with the halfway point being placed over the mouth and nose, sometimes coupled with goggles, to keep sand out of the face.

Damn American soldiers in the war on terror, siding with the terrorists.

I am an American soldier living over here in the mid-east. 2/142 FA. I am from Little Rock.

these "Kufiyas" look more like a fashion statement than a real statement. I even have a brown one to go with my desert uniform. see, I may be a world away; but, I am still fashionably aware.

I think if you want to make a statement; have a protest, or something. you have the right of free speech. don't buy into anymore corporate bs. I know it's hard, but you don't some big fancy company to tell you how to live your life.

Keep up the fight on the homefront. These soldiers are your neighbors.