My post about Khaled's selection as one of NPR's 50 Great Voices has now appeared, in a shorter and much sharper version, on Foreign Policy's Middle East Channel, here. A thousand thanks, alf shukran, to Marc Lynch for his fine editing. (As of this moment, it has 103 'like's. Read it, and if you like, click that 'like' button!) It's great when one's blog postings get some attention, and it reminds me that I need to devote more attention to this blog than I have over the past few months.

In the interests of that project, let me add to the theme I have been developing, on the myths of rai. The Khaled post of course deals with this issue, as does a much longer post on this issue last December 12. Here's another fragment from this on ongoing argument, this one about the late Cheikha Rimitti, about whom I posted an obit in May 2006. 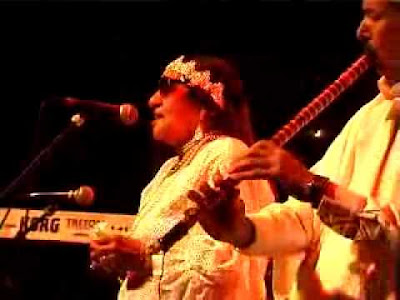 It is probably due to the fact that rai publicity is so focused on the genre's purported oppositionality, that the cheikhat origins of rai are usually emphasized in accounts of rai history, while the bedoui and wahrani strands are mostly ignored. Bedoui was brought to Oran in the thirties and forties by rural-to-urban migrants, and was performed by ensembles led by a vocalist, known as a cheikh, who sang poems (usually self-authored) in a genre known as melhun, and was backed by one or more percussionists playing hand-held frame drums (the guellal) and a player of a reed flute (the gasba). (Here's a clip of the respected bedoui artist Cheikh Hamada, probably dating from the late 50s or early 60s, broadcast on Algerian television when it was under French control.) Wahrani ("Oranais") was an urban genre that developed at the same time, and was heavily influenced by the modern Egyptian neoclassical music of the likes of Muhammad Abdul Wahhab, Umm Kalthoum, and Farid al-Atrash. It also incorporated influences from bedoui, classical Andalusian music, the French chansons of Edith Piaf and Tino Rossi, the jazz imported by US troops stationed in Oran during World War II, and the pasodoble and flamenco favored by Oran’s substantial Spanish population. (Here's a clip of one of the great stars of wahrani, Blaoui Houari. It's possible that this clip also dates from the colonial era.)

Rai publicity, however, generally stresses the cheikha origins of rai music. Unlike the respected bedoui cheikhs, the cheikhat were considered rather disreputable due to the fact that they typically performed in mixed-gender settings, where alcohol might be consumed, at weddings (in front of males), at parties organized for men, and at religious festivals. Due to her disreputable reputation, the cheikha was considered something akin to a prostitute, and in fact cheikhat often performed sexual favors in return for monetary compensation. Like the cheikhs, the cheikhat also sang to the accompaniment of gasba and guellal, but their lyrics were more colloquial and often improvised. The typical picture of old-school rai presented in world music publicity, therefore, is of women singing about scandalous subjects, in bars and bordellos, in front of mixed audiences who are consuming alcohol. While this is a more-or-less accurate image of the cheikhat milieu, it is only one of the strands of rai.

The singer most closely associated with this bawdy image, and the most renowned of the cheikhat, was Cheikha Rimitti (alternative spelling: Remitti), who was born in 1923, started performing in the early 1940s and continued up until her death, at age 83, in May 2006. Her very name and the story surrounding it would seem to instantiate the scandalous character of the rai cheikhat. According to Virolle (1996: 115), the most reliable source on Rimitti, during the 1940s rai music (known then, according to Virolle, as elklâm elhezal or parole leger) was performed at both cabarets and at religious festivals, known as wa‘da-s. It was at the wa'da of Sidi Abed, one of the most well-known festivals, held near Relizane (where she lived at the time) that Saida al-Ghelizania reportedly picked up her performance name Rimitti, while drinking at a cantina. She ordered another round, saying, "Rimitti (francarabe for remettez) la tournée." Someone overheard and remarked on what she had said, and so she became known as Cheikha Rimitti, or, “Give me another [drink].” The story is told in a variety of versions, but symptomatically, the fact that Rimitti was performing at a religious festival where drinking was also going on, is almost never recounted, for that would seem to undercut Rimitti's reputed outlaw status and also problematize the purported contradiction between Islam and alcohol/rai, one of the key oppositions upon which the rai publicity depends.

The other key part of the legend surrounding Rimitti's oppositionality concerns the song, “Charrak, Gatta'” (tear, cut), Rimitti's first hit, recorded in 1954, released on Pathé. (Halasa [2002: 46], otherwise a reliable source, writes that Rimitti started recording in 1936, but this is incorrect. Rimitti only started to perform in public in the early 1940s. Her first recording was released in 1952. Several other sources also claim that Rimitti's first recordings date from the thirties.) Rai commentators typically proclaim that the song's lyrics invited women to lose their virginity. It is not clear when this account of “Charrak, Gatta'” came into currency or who is responsible for it, but it is repeated and spread incessantly in all the publicity about rai and its rebelliousness. Let us pause for a moment, however, to consider this reading of the lyrics. Why would the French recording company Pathé, which released Rimitti's record, put out a song that called on women to give up their virginity, in such a crude way? And wouldn't the colonial authorities have been hyper-sensitive about such an incendiary lyric? Surely if its “meaning” were so apparent, the French colonial authorities would have censored the recording, rather than to allow it to be sold freely and to be broadcast on state-sponsored radio?

Fara C, writing in L'Humanité (2000), offers a more plausible story. One night, while Rimitti was performing in a cabaret, a dispute broke out between a jealous woman and her male companion. The woman grabbed her date, pulling on his shirt. Rimitti sang, spontaneously, “Tear, tear, and give it to Rimitti to sew up.” Then she went and hugged the couple. This, asserts Fara C., is the origin of the lyrics of the song, which Rimitti later recorded. Some listeners, according to Fara C., did consider the song an assault on the values of virginity and were highly scandalized. Such an interpretation is therefore possible—but it is not the only one. In any case, it is highly doubtful that Rimitti originally intended the song in this way or that this was how the song's meanings were generally understood at the time. With the exception of a few academics, however, almost no one who writes in English about rai bothers to consult sources like Fara C.'s article, especially, it seems, if the sources are published in French. Rai publicists prefer instead to repeat stories that embellish the image of the rai rebel, and so "Charrak, Gatta" has come to be represented as having a perfectly clear meaning: an attack on virginity.

The song "Charrak Gatta" can be found on the CD, Aux sources du raï. Les Cheikhat: Chants de femmes de l'ouest algérien, Club Du Disque Arab, 1995. I am trying to find a translation of the lyrics.

Good ethnographic sources on cheikhat are Willy Jensen's Women without Men: Gender and Marginality in an Algerian Town (Brill: 1985) and, for Morocco, Deborah Kapchan's Gender on the Market: Moroccan Women and the Revoicing of Tradition (Pennsylvania: 1996). (Kapchan uses the spelling shikhat.)

More to follow. Can't promise you when.
Posted by Ted Swedenburg at 3:58 PM

This comment isn't specific to this particular post. I've just been listening to Shadia Mansour and was going to ask if you had heard of her new song but then when I was looking for a good link to point you to you were actually mentioned in the article:

Thanks for this link!