I've commented previously on what I am provisionally calling the "tough guy" kufiya. (Re: From Paris with Love, Green Zone, The Hurt Locker, The Book of Eli, Reign of Fire, and The Three Kings.)
I recently watched Green Zone, which I found to be, on the whole, not bad. Better than I had expected, based on some of the reviews I had read. Matt Damon, as Chief Warrant Officer Roy Miller, is shown wearing a kufiya (khaki, regulation US military issue) from the beginning of the film, the first time you see him, and throughout. Always neatly arranged, as a conventional scarf should be worn. Always like this, as in the first view we get of Miller.

You can see more shots here (from publicity stills) of Miller/Damon, who is always sharp and professional in his dress. His style of dress seems also to reflect his generally upright conduct throughout the film. [Added August 30: one or two of Miller's men are also shown wearing kufiyas, in the same manner as Miller.]

By contrast, there is Maj. Briggs (played by Jason Isaacs), who is Miller's chief on-the-ground antagonist in the US military, and is the main operative for Clark Poundstone (the Paul Bremer character, played by Greg Kinnear). Briggs is hunting down Iraqi "high value targets," Saddam's men who appear on the "deck of cards." Without necessarily knowing it, Briggs' mission is to eliminate (on behalf of Poundstone) Gen. al-Rawi and thereby kill the potential for scandal. Miller by contrast decides to try to capture al-Rawi alive, in order to expose the fact that the WMD's, the pretext for the invasion of Iraq, were a mirage.

From the perspective of the film, therefore, Briggs is somewhat out of control. The fact that he wears what I take to be a non-regulation colored blue kufiya, and that much more of his kufiya is exposed than is Miller/Damon's, would appear to index Briggs' roguish behavior. Note the marked difference between Briggs and Miller: the contrasting colors of their kufiyas and the different ways in which they wear their scarves. Briggs' dark glasses, messy hear and mustache also contribute to his "dangerous" look. From the film's perspective, this is not a positive "bad boy" image. In the end, and somewhat predictably, Briggs meets a violent end, while both he and Miller are chasing down al-Rawi. 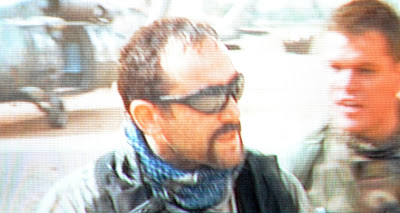 Probably the most interesting political moment of Green Zone occurs toward the end. Miller finally has Gen. al-Rawi in his clutches, when suddenly his Iraqi translator "Freddy"shows up and shoots the Ba'athist general. "Freddy" then tells Miller, "It is not for you to decide what happens here." Reminding us that al-Rawi was in fact a vicious oppressor, guilty of many crimes against the Iraqi people. Miller's desire to capture him alive in order to blow the cover on the WMD myth does not trump the desire of Iraqis for justice.
[Added August 30: At one point Miller, or maybe another US soldier, calls an Iraqi a "hajji." Was this appellation in currency at the beginning of the invasion? I don't know.]
As for MIA and her new album /\/\ /\ Y /\ -- there has been lots of discussion about its politics and whether or not MIA is politically sophisticated, authentic, has sold out, is merely a silly provocateur, and so on...Check out Jeff Chang's post on MIA and MAYA is a particularly good take on these questions.
What I haven't noticed in all the discussion is the fact that the cover of the album, looks, at face value, like this: 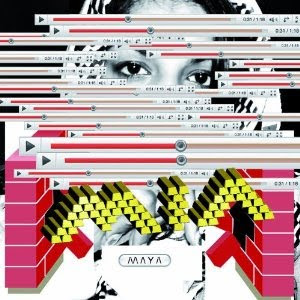 The cover is 3-D, however, so if you buy the actual CD (get the Deluxe Edition) and look at its cover from a certain angle, the "veiling" over MIA's face is revealed, and you see...yes, MIA wearing a kufiya, of sorts.
MIA remains the provocateur, and even though she is married to the son of a millionaire and even though her politics are not "coherent" (are yours?), I appreciate the gesture. Kufiyas of course also show up in her controversial "Born Free" video, the first single released from the album, which I discussed here. 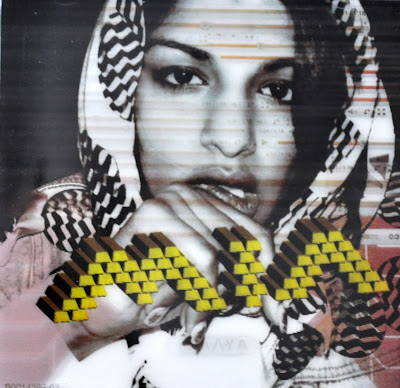 Posted by Ted Swedenburg at 9:42 PM