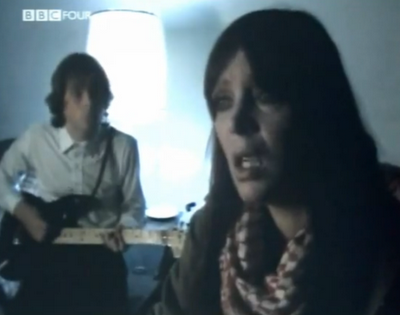 She sings "Chelsea Girls," authored by Lou Reed and Sterling Morrison (of Velvet Underground), which appeared on her 1967 album solo album, Chelsea Girl. The song, and album, refer to Andy Warhol's 1966 film Chelsea Girls (which I've never seen). The youtube segment from the BBC documentary opens with some clips from Warhol's film. Then Nico starts singing Chelsea Girls--not the entire song, just selected verses--backed by Joe Bidewell on electric guitar. Nico talks about how the girls at the Chelsea were her friends and how she was the person who made the Chelsea famous. These are the lyrics from the much longer song that she sings in the film segment.

Here's Room 506
It's enough to make you sick
Bridget's all wrapped up in foil
You wonder if she can uncoil.

Pepper she's having fun
She thinks she's some man's son
Her perfect loves don't last
Her future's died in someone's past.

Dropout, she's in a fix,
Amphetamine has made her sick
White powder in the air
She's got no bones and can't be scared

Here comes Johnny Bore,
He collapsed on the floor
They shot him up with milk
And when he died sold him for silk

But what about the kufiya?

It could "mean" any number of things. Or all of them. At the time, Nico was living in New York City, when the kufiya was quite the fashionable item for hipsters in the city. Like, for instance, Madonna and all the punk and hip-hop kids hanging around places like the Roxy, watching Afrika Bambaataa. And the kufiya would have been seen as well on the shoulders of left-wing activists involved in the anti-nuclear movement. And you might have seen it on post-punk bands like Delta 5. Or who knows, maybe Nico (who was living in Europe in the late seventies, as far as I can tell) was "citing" the Red Army Faction (Baader-Meinhof Gang), whose politics were so (unfortunately and tragically) tied up with Palestinian solidarity. 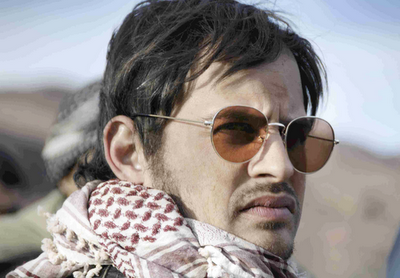 Moritz Bleibtreu as Andreas Baader, from the film, The Baader Meinhof Complex
Or the choice of the kufiya may have had more to do with cultural affinities. Nico recorded the album, Drama of Exile, in 1981, which has a bit of an "Eastern" feel to it, due to the presence of the Algerian Muhammad Hadi (a.k.a. Mad Sheer Khan) on guitar and buzuki. The production of the album has a murky history, and two different versions were released. (Unfortunately, it is currently out of print.)

Interestingly, this is one version of the cover of the re-released album, on Invisible Records (1983) and on Rakos (2004). Again, it shows Nico in what looks to be a kufiya. 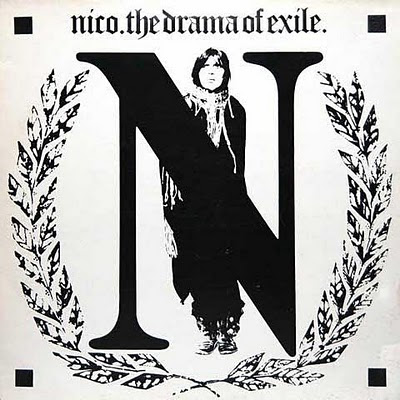