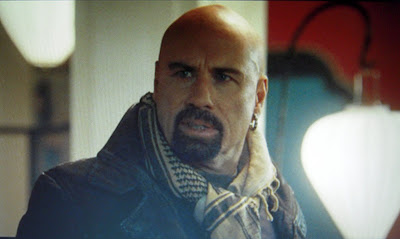 I have posted previously about the kufiya-wearing Charlie Wax character in the film, From Paris with Love, played by John Travolta. I have finally seen the film. It was agony. If not for the sake of research, I would have turned it off long before the end. It's a real turkey of a film, but the kufiya does play a prominent role. CIA agent Charlie Wax, who lays waste to multiple "bad guys" in the film--Chinese, Pakistanis, devious beautiful women, banlieusards--at the rate (his partner James Reese [Jonathan Rhys Meyers] estimates) of one an hour--wears a kufiya in almost every scene. Along with his bald pate, goatee, earring, and leather jacket, the kufiya seems to be essential to Wax's image as a kind of rogue secret agent who uses unconventional (i.e. bloody) methods to track down and get his prey. (He's also supposed to be funny, but the humor never really works.) The kufiya has nothing to do with any identification on the part of Wax with Arabs, who he at one time refers to as "ragheads." Rather it seems to involve a kind of sympathetic magic that, through mimesis, taps into the power of the Other (terrorist, raghead)--see Taussig, Mimesis and Alterity, 1993. This seems key to the phenomenon of what I'm calling the "tough guy" kufiya. (After I re-read Taussig I will probably have more to say about this.)
As if to reinforce the fact that Wax is tapping into the strength and energy of the bad guys, the ragheads, one of the banlieusards who is a member of Rashid's gang that deals in cocaine and other crime wears a kufiya. Rashid is on the right. (The fact that Wax and Reese at first get held up by a gun-yielding 10-year old gang member works in the film to show how pathological these gangsters are. To deal with such criminals, whose drug ventures are linked to the Pakistani terrorist suicide bombers, the final targets of Wax and Reese, of course requires "unconventional," i.e., lethal methods.) 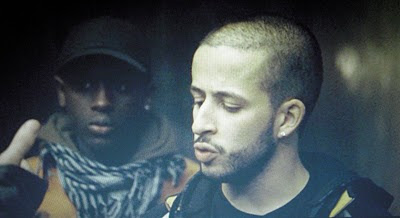 Wax's guns are almost as ubiquitous as his kufiya. 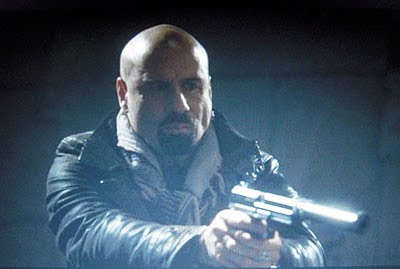 Here's a different look, with a baseball cap. (I never could figure out why Reese was carrying around the vase with cocaine.)

This is one of the film's "humorous" scenes, which I suppose is intended to lend Wax, who is otherwise preoccupied with killing bad guys non-stop, a human and likable side. Wax is on his way to take out the Pakistani terrorist who is driving Reese's erstwhile girlfriend Caroline on a mission to bomb a summit meeting. Wax gets the driver to play a bit of pop fluff on the radio, and, as he pops his fingers, he tells the driver not to tell anyone that he ever listens to such "soft" music.

I learned today, courtesy a photo in the New York Times, that a kufiya also appears in the new film, The A-Team. Another "tough guy" kufiya.
Here's a photo. That's Bradley Cooper as Lt. Templeton ‘Faceman’ Peck on the left, and Liam Neeson as Col. John ‘Hannibal’ Smith on the right. 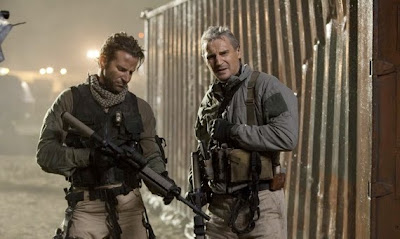 I suppose I will also need to see that film as well--and I dread that it will be even worse than From Paris with Love. I also plan to see The Book of Eli soon but I have higher hopes for it.
A couple friends have told me that the character of Mercedes wears a kufiya in the TV show Glee. I have not seen the show, and have been unable to track down an image of Mercedes in kufiya. If anyone has any ideas about how I might do so, please, do tell.
Posted by Ted Swedenburg at 9:37 PM

she's wearing the scarf in the Episode "funk" when she's talking to Quinn and through out. Its gorgeous, I want it.