Ben Affleck comes correct! From Angry Arab, I learned about this report by Mary Ann Akers, from the Google inaugural party:

Affleck was railing about the Israeli invasion of Gaza. And, thanks to his special access, he said he has already registered his concerns with the highest echelons of the Obama administration. He said he gave White House chief of staff Rahm Emanuel an earful about Israel at a private dinner the night before."

It pays to have an agent who is the brother of the new White House chief of staff. Affleck's agent is Ari Emanuel, the model for obnoxious Hollywood super agent Ari Gold in the hit HBO show "Entourage."

I had understood that Ben Affleck was of Arab origin, from the same family as Michel 'Aflaq, founder of the Ba'ath Party. I've not found conclusive evidence, however. Poking around, however, I did find this youtube clip, and learned that he has spoken out about such issues before. Check it out. I have been somewhat lukewarm about Affleck as an actor; my estimation of him as an honorable human being has just risen.

Meanwhile, I also learned, courtesty of the amazing music blog, BigO, that Annie Lennox was criticized for her high-profile activities against Israel's assault on Gaza, in an open letter published in The Jerusalem Post. BigO reproduces her very sensible response, which she published on her myspace page. (Presumably the Post didn't want to publish it.) 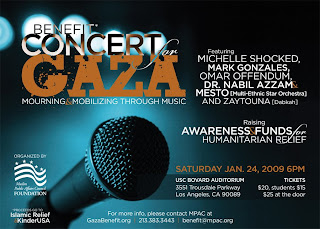 The Muslim Public Affairs Council has organized a Benefit Concert for Gaza, to be held today on USC campus, with Michelle Shocked as the headliner. Tony Shalhoub, Casey Kasem and Salam Al-Marayati have issued a letter endorsing the event. Here's an excerpt:

On January 7th, a senior U.N. official in Gaza declared, "I want to tell the world's leaders something: You are not to sleep, eat or drink until you stop the killing of innocent people in the Gaza Strip." On that same day, Cardinal Renato Martino, the head of the Vatican’s Pontifical Council on Peace and Justice, said "Look at the conditions in Gaza: more and more, it resembles a big concentration camp."

Let's hope we hear more from Tony Shalhoub (Monk) too.
Posted by Ted Swedenburg at 2:14 PM