Although I've been completely obsessed today by what is going on in Gaza, the kufiyaspotting must go on. Three random items:

1. Even though Urban Outfitters discontinued its Early Spring '07 kufiya line, marketed as "antiwar woven scarves," it has continued to sell kufiyas, just under other names. Today you can buy a pretty authentic-looking (but probably made in China) black-and-white kufiya from Urban Outfitters online, marketed as a "houndstooth scarf," and found under male accessories. $20. Good for wearing at demos to protest Israel's onslaught on Gaza. 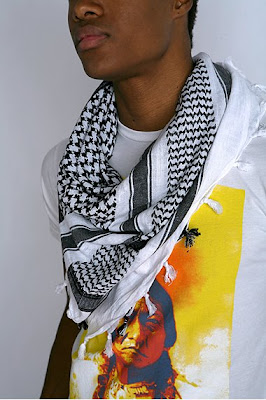 Note that the model is wearing a Sitting Bull t-shirt, also available from Urban Outfitters.

Does the Sitting Bull t-shirt make the houndstooth scarf more "edgy"? Or does it remind us that Palestinians too are living in conditions not unlike Indian reservations?

2. I found this photo at a post on Daily Style Guide, entitled "Controversial Fashion: The Shemagh Scarf." 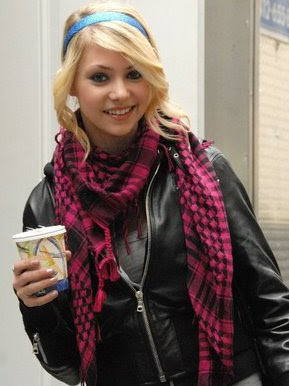 It's Taylor Momsen, who plays Jenny Humphrey on The CW television series, Gossip Girl. It's the one about teen socialites of the Upper East Side, New York City, full of jealousy, drugs and sex.

3. From a recent report (December 12) by the very well-informed reporter Amira Hass in Ha'aretz, on Hamas' treatment of the Fateh opposition in the Gaza Strip. (One can only hope that things might change a bit after today.) Please read the entire article here. (Thanks, Theresa!)

Are there really no rivals (Fatah, in other words), or have they been silenced? Around November 11, the anniversary of Yasser Arafat's death, the Palestinian police in the Gaza Strip worked to conceal any symbols related to the date, the man and the movement - in addition to prohibiting the staging of any memorials.

It wasn't the Fatah movement that called for rallies, but a committee composed of PLO organizations. It didn't even attempt to hold rallies in an open area (such as a soccer field or city plaza) - as Hamas does every few days (with its green flags). When yellow Fatah flags were hung up, police were called to the location and removed them; high school students who went around wearing checkered kaffiyeh-like scarves - or any other symbol that alluded to Arafat and Fatah - were asked to remove them and also summoned for a brief police interrogation. Even candles that were set out in windows in Abu Amar's (Arafat's) memory were confiscated. So Fatah supporters reported, at least. The removal of these symbols wasn't only an expression of the government's self-confidence, but of intimidation and coercion as well.