Kufiyas are, maybe, okay, but taking off Eid al-Fitr is "un-American"

Yarmulkes are banned at the workplace, too.

From the Wall Street Journal, October 18.

"Mass firings at meatpacking plants in Colorado and Nebraska last month highlight growing conflicts over how to accommodate religion in the workplace. The plants, owned by the U.S. unit of Brazil's JBS SA, collectively fired about 200 Muslim Somali workers who walked off the job over prayer disputes. The workers had asked management to adjust their evening break times so that they could pray at sunset. Managers at both plants initially agreed but then reversed their decisions after protests by non-Muslim workers...

A Tyson Foods Inc. chicken-processing plant in Tennessee this year agreed to let its work force claim holiday pay for Eid al-Fitr, which marks the end of the Muslim holy month of Ramadan, instead of Labor Day. Non-Muslims protested that the policy was un-American. Tyson managers reinstated Labor Day and switched a paid birthday to a personal day that could be used for religious observances...

In August, a federal judge in Nevada ruled that the Las Vegas police department must allow an orthodox Jewish officer to wear a beard, but not a yarmulke. The judge noted that the city permits employees to wear beards for medical reasons, but it prohibits all officers from wearing headgear... 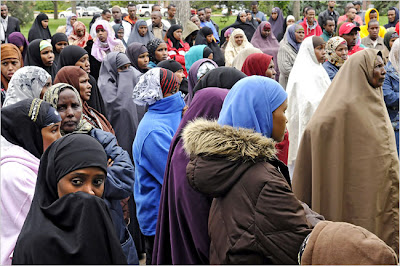 Muslims in Greeley, Colo., last month protested the firing of more than 100 JBS workers after a walkout over Ramadan. (Sara Loven/The Greeley Daily Tribune, via AP)
The Somali workers said that they should be allowed to pray on their breaks and would be gone for only a few minutes. Supervisors responded that the only permitted unscheduled breaks were for use of the bathroom and that the plant couldn't have hundreds of workers leaving the lines at the same time.

"It takes less than five minutes," says Graen Isse, a Somali worker who was fired following a similar dispute at a JBS plant in Greeley, Colo. He says he and other workers offered to let JBS deduct pay for time spent praying."

Update: I've just read an article about struggles over such issues at a JBS plant in Grand Island, Nebraska, from the Oct. 15 New York Times. It's a little more nuanced than the WSJ article. Interestingly enough, the objections to the JBS decision to give Somali workers time off to pray (and to cut the workday, and pay, of all workers by 15 minutes) came from Sudanese (mostly Christian) and Latino workers!

As an aside, Greeley, Colorado is where Sayid Qutb had his revelatory experiences with American civilization and mores, in the late 1940s. Props to John Calvert of Creighton University for doing the most to dig this info out. Read about it here.
Posted by Ted Swedenburg at 10:37 AM