Thanks to a comment by Invincible on my previous post, I now know about her song, "People Not Places." You can hear it and read the lyrics here. It's part of Expressions of Nakba, an international virtual art exhibit put together on the 60th anniversary of the Nakba, the catastrophe that created roughly 750,000 Palestinian refugees.

The song describes a "birthright" tour through Israel, that reveals the hidden traces of Palestine at various Israeli tour sites.

Blue white flags
For the birthright Tour I’m on
Never mention 3 villages the airport is on
recent history buried but it speaks thru the sand
all jews- law of return-I don’t seem to understand
a land without a people for people without a land? But
I see a man standing with a key and a deed in his hand

Invincible writes: "One of my main aims is to destroy the myth of a 'Jewish birthright' to a land Palestinians are denied the Right of Return to." (Check out Birthright Unplugged.)

Check out Invincible's blog where she gives an account of playing a show in Leipzig, and how promoters were uneasy about her kufiya, because they're often worn by neo-Nazis in Germany.

Plus: Awhile back I received an announcement of a new track from Mutamassik, posted on the Rough Americana website. It's called "B. Shebang (Bastille Mix)," and I highly recommend it. But also check out the other free downloads there, from Mutamassik and her husband, Morgan Craft. I'm really looking forward to the release of Mutamassik's new album, "That Which Death Cannot Destroy." For my review of Mutamassik's last release, go here. 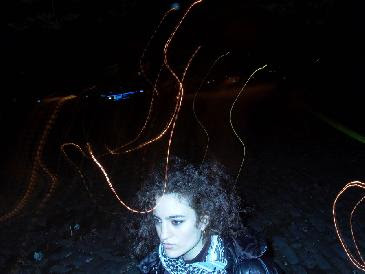 I posted this photo of Mutamassik almost three years ago, before I was "kufiyaspotting" in a focused way. (It used to be up on the Rough Americana website, and was taken by Arthur Jaffa.)
Posted by Ted Swedenburg at 12:22 AM

Neo Nazis in Germany have adopted the kufiya because, they say, it's a symbol identified with violence against Jews. If they could swear swastikas, legally, they would, so instead they display the second-most identifiable symbol of Jew-hatred.

Who calls them "neo-Nazis" and why? There're lots of folks out there calling names that are lies to silence and hurt. Are these keffiyeh-wearing Germans really proponents of Nazism? And who decided and how that the keffiyeh is "second-most identifiable symbol of Jew-hatred"? To me, the keffiyeh is a symbol of resistance and liberation. The Magen David, which adorns the Israeli flag, is a symbol of racism and deceit