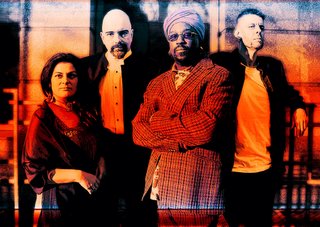 I’ve not compiled a best-of list for a couple years, although I used to do it regularly on my Interzone Radio show. But lately I’ve been consuming music in a somewhat different way, sampling cuts from here and there, and I’ve been less focused on what is the most “current” or hip in the world music scene. But inspired by Steven Shaviro, I’ve decided to have at it again. My top 10 is all “world music”, whatever that is. My "others" ventures a bit further generically. This list is not necessarily in order of what I think is best, and for sure I’ve forgotten some things....

6. Baba Zula & King Tubby, Duble Oryantal. Despite the punned title and the presence of King Tubby, the dub is lowkey, just enough to lend the various Turkish folk-based genres presented here an edge, and an element of subtle strangeness.

7. V.A., Rough Guide to the Music of the Sahara. The revelation here is that the incredible gutbucket blues guitar of the legendary Malian group Tinariwen is not a one-off, but a much wider phenomenon. Check out Nayim Alal and Mariem Hassan.

9. MIA, Arular. This dancehall/grime blowup, with its Tamilese Sri Lanka tinges, is on everyone’s list, and I am compelled to concur. Although MIA’s references to violence and terrorism are controversial,she does namecheck the PLO--and gets away with it.

10. Khaled, Ya-Rayi. The US mix was released in 2005, but the producers almost wrecked it for me by putting the execrable “Love to the People” (English and Arabic versions) onto what, in the French version, was in part a return and tribute to the roots of rai, the Wahrani genre. So skip cuts 2 and 11 and all the “peace through music” bullshit.

Other favorites: I get lots of my music from emusic, and lately have been very keen on all the offerings from Tzadik (John Zorn’s project to expand our notions of Jewish music) and Doublemoon, which features all kinds of great Turkish music. I’ve also been into favela funk and reggaeton, like everyone else. Also into Ellen Allien (everything! this year’s release is Thrills), Laura Veirs’ Year of Meteors, and OOIOO’s gold & green.

Good news from the NYT: "Independent labels account for more than 18 percent of album sales this year - their biggest share of the market in at least five years, according to Nielsen SoundScan data...The independent sector as a whole already outsells two of the big four companies, Warner Music and EMI."