That's what a personal blog is for, right? Three items.

1. My article, "Egypt's Music of Protest: From Sayyid Darwish to DJ Haha," was published in the new issue of Middle East Report (#265, Winter 2012). The issue theme is, Egypt: The Uprising Two Years On. Please buy and read the entire issue. And then subscribe to MER, if you have not already.

2. My article, "Palestinian Rap: Against the Struggle Paradigm," has appeared in a new volume from Routledge (December 2012), Popular Culture in the Middle East and North Africa: A Postcolonial Outlook, edited by Mounira Soliman and Walid El Hamamsy. The volume is expensive ($125), so I won't urge you to buy it but I will urge you to get your library to order a copy.

3. I just turned over several old Palestinian resistance movement posters to the Palestine Poster Project Archives, collected in Beirut in 1970 or 1971. You can view them here. 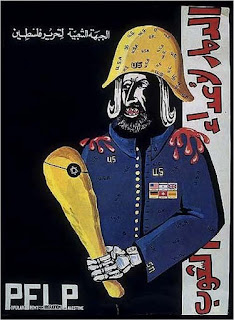 I particularly like this one which, I learned from the Archive curator Dan Walsh, was designed by Ghassan Kanafani himself. It says: "destroy the enemies of the people."
Posted by Ted Swedenburg at 11:05 PM