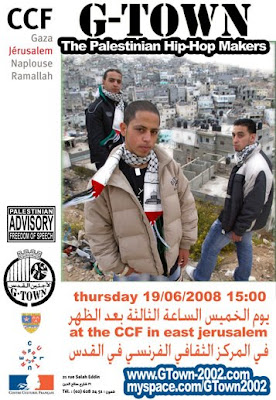 Yesterday I finally got to attend a live performance of Palestinian rap, by G-town, from Shua'fat. They performed at the French Cultural Center (FCC), on Salah El-Din Street, in East Jerusalem. The event was part of the FCC sponsored program, Fête de la Musique en Palestine, and it was opened by Jack Lang, former Minister of French Culture! (Lang used to make efforts to promote French rap, back in the day.)

I was very glad to make the discovery of this group--which only happened because I happened to walk by the FCC the day before, and saw the advertisement for the event. G-town are quite good, charismatic performers, interesting lyrics that mostly have to do with Palestinian concerns, and good beats. The venue was not ideal for a hip-hop event--the garden of the FCC seems more suitable for sedate cocktail parties and the life. But the band was enthusiastic, if a little ragged in the execution. The crowd was quite young, pre-teens and young teens for the most part.

I chatted a bit with Muhammad, the group's leader, after the show. He said he learned English from rap lyrics. (He speaks English quite well.) The artists he listened to most while in high school were Tupac, Ice Cube, and Dr. Dre. Muhammad said that he considered this rap to be a kind of resource that he could use to express the reality in Palestine, and particularly, the fact that Palestinians in the Occupied Territories as well as those who carry Jerusalem identity cards, live in a ghetto like blacks in the United States. They face violence, racism, residential segregation, etc. The G in G-town, in fact, stands for "ghetto." 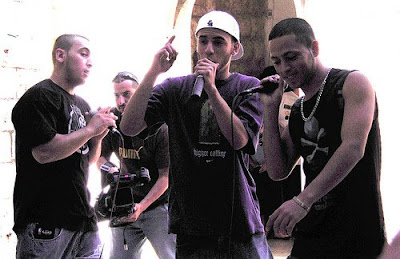 (photo shot by: me; Muhammad is on the right)

One of the band members said that G-town has been in existence since 2002--but they didn't actually perform til 2006. I asked what the older folks thought about the rap that his group does, and he said, at first they thought it was all about bling-bling and gangstas, but then they listened to it and realized that G-town was discussing serious political and social issues. His father supports what he does and has attended his concerts.

Check out G-town's myspace page here. You can download some free tracks if you've signed up for myspace, and can also check out some photos of G-town in performance. I wondered about whether bands like G-town have opportunities to perform, but apparently they do. A researcher I met who knows the group said that they had performed at a Shu'fat refugee camp cultural festival last weekend at the Hakawati theater in East Jerusalem. The lineup included a wedding band (bad, she said), a comedian, and G-town (the headliner).

Part of the East Jerusalem neighborhood of Shu'afat is composed of Shu'afat refugee camp, and some of the group's members are from the neighborhood, and some in the refugee camp. The refugee camp and the adjacent village of 'Anata are in the process of being encircled by an Israeli-built wall. Soon, there will only be one exit out of Shu'afat. Anyone who does not carry a Jerusalem identity will be stuck inside. G(hetto)-town indeed! (For my photos of the Wall and Shu'afat, and more info, go here, here, and here.)

G-town have self-released a CD, called Derdaka (which means, talking nonsense). I have no idea how one could obtain it--they gave me a complementary copy.

I also met the man at the FCC who was responsible for putting on the show. He told me that there are five French Cultural Centers in Palestine-Israel: West Jerusalem, East Jerusalem, Nablus, Ramallah and Gaza. France is the only foreign country with a cultural mission in Gaza. He told me as well that the French rap group M.A.P. (Ministère des Affaires Public), from Lilles, performed last year in Nablus as part of the Fête de la Musique en Palestine. They played at al-Najah University, outside, and 2,500 to 3,000 people showed up. I was quite surprised, given the conservative reputation of Nablus and al-Najah, but he said that no one complained and that in fact, the reception was quite enthusiastic. The FCC brought M.A.P. (whose members include two men of North African origin) back to Palestine in April, and the group performed in Gaza. My informant said that no objections were raised, Hamas didn't complain, and the band was received enthusiastically. He also said that the FCC shows French movies with Arabic subtitles, and that these attract large audiences as well.

Go here for a bit of video footage of MAP at al-Najah in Nablus. You can see how big the crowd is. And kufiyas are in evidence. And check here too.

And check out this video of a member of MAP rapping at the Wall, in front of some graffiti of Leila Khaled.

Posted by Ted Swedenburg at 8:06 AM

Nice write-up about G-Town! As I am indeed that researcher with whom you spoke, there is one little inaccuracy. G-Town, along with the (bad) wedding band etc., took place in East Jerusalem at the Hakawati theater and not at Shuafat camp, although all the performers, as I understood it, were from the camp. Also, G-Town was formed in 2002 but only performed publicly in Ramadan 2006.