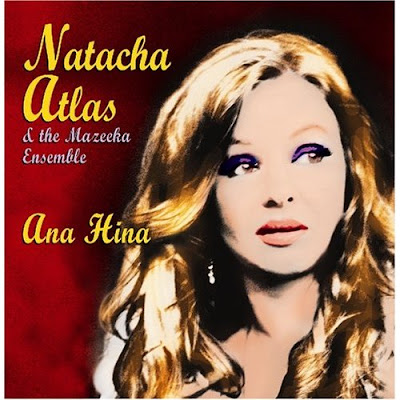 It's always an exciting event when a new Natacha Atlas album is released. Ana Hina is already out in Europe, but not due to be released on CD in the US until September. Fortunately, you can purchase downloads, from iTunes or amazon.com or emusic.com.

In some ways, Ana Hina represents a continuation of what Natacha has been up to since the beginning, "fusions" of Western and Eastern music. The difference is that this album represents more of a look backward, a "revival" of earlier fusion traditions. In particular, those of Abdel Halim Hafez (Egypt) and Fairuz (Lebanon). So rather than Arabic tunes set to reggae or hip-hop or dance beats, Natacha returns this time to famous East/West fusions that go back fifty years or so. As Natacha explained when she performed some of this material in Chicago in September 2006, she wants to show that East/West fusion isn't something "new" but something that musicians in the Middle East have practiced for decades.

My favorite tracks on this album are the 'Abdel Halim tunes and one of the Fairuz numbers. All of them are done pretty much as straight covers, as tributes, not deviating in any remarkable way the originals. (The bandleader, pianist and arranger, as in Chicago, is Harvey Brough, and the band plays all acoustic instruments.) When Natacha introduced the 'Abdel Halim Hafez songs that she performed in Chicago, she said what attracted her was their jazz feel. "Bayni wa Baynak Eh?" (What is there between us?) is a well-known 'Abdel Halim song, whose instrumental riff, if you can believe it, is drawn from the Woody Woodpecker cartoon theme song! (Thanks to Martin Stokes for this information.) The Woody Woodpecker influence is somewhat stronger in the Abdel Halim original. Check it out for yourself: here is Woody Woodpecker, and here's Abdel Halim. (For the lyrics to "Bayni wa Baynak Eh?", go here.) The other Abdel Halim song Natacha does is "Al-Aseel," a somewhat lesser-known song, and even more jazzy than "Bayni wa Baynak Eh?" (Listen to the original here.) Of the three Fairuz covers ("Ya Laure Hobouki," "Le Teetab Alayi," and "La Shou El Haki"), my favorite is "La Shou El Haki" (Why this talk?). Written and arranged by the Rahbani brothers, it has that typical light, snappy feel that is so characteristic of their work. The other song I particularly like is "Hayati Inta Reprise," a cover of a song on Natacha's previous album, Mish Maoul. Particularly effective on this track is the accordion work, and especially the solo, of Gamal Kurdi (who used to play accordion with Abdel Halim Hafez.)

These were the highlights for me, but all the tracks are of a consistently high quality. "Lammebada," the opening number, is a revered song from the Arab Andalusian tradition, that has been recorded numerous times. Check out Catalonian singer Maria del Mar Bonet's live version, on youtube. It has also been recorded by La Mar Enfortuna, who opened for Natacha at the Old Town School of Folk Music in September 2006. I'm never fully convinced by tracks recorded by Natacha in English, but her version of Nina Simone's "Black is the Color" is serviceable. Also worth mentioning is the very pretty, "He Hesitated," an anti-war song, which is about a soldier pondering whether or not to shoot.

If you are familiar with Abdel Halim Hafez and Fairuz, you might think, like one of my Palestinian friends does, that Natacha's versions are pale imitations. My response is, no, Natacha isn't Abdel Halim or Fairuz, nor does she pretend to be. She is doing tributes to their music and their spirit. I think they are admirable renditions, and I fully endorse the idea of trying to bring their artistry and their tradition of cultural openness to Western audiences. This is a great recording, and I recommend it highly. Check it out, and then go seek out the originals as well.
Posted by Ted Swedenburg at 9:57 PM

Check out our coverage of Natacha Atlas and the Mazeeka Ensemble on LAsThePlace.com!

Hi! I really need to have the translation of La Shou el Haki lyrics (I'm gona dance it)..but I can not find it! can you help me?

Thank you so much!

yep i need to did could you find it ? i'm still searching