I'm fairly confident that this was hardly reported in the US--but it's very dramatic footage: "masked" (i.e. kufiya-swathed) Israeli Jewish settlers, carrying baseball bats, beat up an elderly Palestinian farmer. Such events are not at all uncommon in the Occupied Territories--here's a report from Ha'aretz of a similar event last year. Thanks to Israeli human rights group B'tselem, this particular beating was videotaped. B'tselem passed out 100 video cameras to Palestinians, in the hopes that such events would be documented. The project is called "Shooting Back." 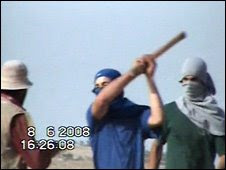 Thanks to Elliott, who alerted me to this report on BBC.

These attacks by "masked" settlers remind me of the days of the Israeli death squads--the "undercover units" that were put into operation in the Occupied Territories in 1988 by then-Minister of Defence Yitzhak Rabin, as a means of taking out intifada activists. As Anita Vitullo reported in Middle East Report (No. 178, 1992), as of 1992 these undercover squads, which typically performed their operations in "traditional" Arab dress (which always included kufiyas), had killed over 100 Palestinians.

What usually happens in the cases of settler attacks is that the perpetrators are not charged. In this instance, two settlers have actually been arrested. I'm sure it is only thanks to the fact that the attacks were recorded on video, and that the video got into the hands of international media, like the BBC.

This is in marked contrast what happened in the wake of the recent attack on two Palestinian youths who were hanging out at the mall in the Israeli settlement of Pisgat Ze'ev in the East Jerusalem area. The Palestinians were set upon by 80 Israeli Jewish youths from the settlement, and badly beaten. The Israeli settlers wanted to ensure that the mall was Arabenrein. No onlookers intervened. The attacks ended only when the police intervened. To date no one has been charged. No doubt this was not reported in the US, but it was reported by Ha'aretz.

Why were these Palestinian youths hanging out in the mall? There aren't any malls, or anything like them, in the Arab areas of Jerusalem. The Jerusalem municipality provides five times as much funding to Jewish areas as to Arab areas. But everyone pays the same taxes.

For photos, and descriptions, of settlements, the Wall, checkpoints, and expropriations, please check out my flickr account. This is what I've been checking out for the last few days.
Posted by Ted Swedenburg at 12:51 AM