Ramy Essam, voice of the Egyptian uprising, is the 2011 Freemuse Award winner

Congratulations to Ramy Essam, winner of the 2011 Freemuse Award. Ramy, of course, was the author of the famous, unforgettable Tahrir song, "Erhal" (Leave). 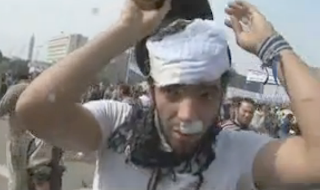 And he was arrested and tortured by soldiers, who dragged him and other Tahrir occupiers off the square, on March 9. The story was reported widely, most memorably (in my opinion) in this account by Steve Inskeep of National Public Radio, who visited Ramy in his home. I loved this part of the report:

They [Ramy and his brother Shady] laugh and say yes. Even in pain, Ramy Essam smiles.

Ramy continues to be active in support of the struggle, and especially, against the SCAF, the junta that continues to rule Egypt, the Supreme Council of the Armed Forces. Presumably it was due to this that the Dean of Cairo University's Medical School shut down a concert, in mid-performance, that Ramy was performing there on October 26. Read about it here.

FREEMUSE, The World Forum on Music and censorship, is an independent international organization, whose secretariat is based in Copenhagen, which advocates freedom of expression for musicians and composers worldwide. Pete Seeger was the Freemuse Award winner in 2009.

Mabrouk, ya Ramey. Why don't you learn this song from Pete Seeger and sing it in solidarity with #OccupyWallStreet when you go to Copenhagen Stockholm to receive your award on November 21?

Ramy will receive his award at the Right! Freedom of Music & Speech conference in Stockholm on November 21. One of the speakers at the conference will be the artist Peaches! (Can you imagine the right-wing and conservative Islamist press having fun with this one?!) Thanks to 'anonymous' whose comment prompted this correction.
Posted by Ted Swedenburg at 10:51 PM

Ramy Essam will receive the Freemuse Award in Stockholm, not Copenhagen! During conference Right! Freedom of Music & Speech. See right11.se for more information!

Thanks, I will correct this.