Someone who follows this blog wrote to me awhile back and said to look for kufiyas in the Israeli film Kazablan (sometimes spelled, Casablan). Thanks! (I can't find your email...so no personalized message.) Kazablan (1974, dir. Menahem Golan) is an example of a "bourekas" film, a genre that was dominant in the Israeli film industry from 1967-1977. The bourekas feature Mizrahi Jews, Jews of "Eastern," primarily Arab background, who in an earlier era, were usually called Sephardim. Today "Mizrahim" is favored.
The classic study of bourekas is Chapter 3 of Ella Shohat's highly respected and invaluable Israeli Cinema: East West and the Politics of Representation (University of Texas, 1989). Shohat shows how these films, while they represented a massive new presence of Mizrahim on the screen, nonetheless continued a tradition of stereotyping "Eastern" Jews. Bourekas tend to present the Mizrahim in folkloric and colorful fashion, and hence, as ultimately different from and ultimately inferior to Ashkenazim, European Jews. Most bourekas are (like Kazablan) directed by Ashkenazi Jews, thereby continuing the long-standing practice in Israel whereby Mizrahim and Arabs are denied self-representation: they must be represented. The typical plot of the bourekas is one in which unity of the (Israeli) Jewish community is achieved, and affirmed, between Ashkenazi and Mizrahi Jews, usually by means of a "mixed" marriage. Some of the problems and grievances of the (mostly poor and working-class) Mizrahim are staged, usually in quite muted form, but these are always "overcome" by an ending that brings everyone together. It is significant that the era of the bourekas' popularity coincided with heightened Mizrahi political militancy, exemplified in particular by the emergence of the Israeli Black Panthers.
Kazablan, then, is a typical bourekas product. What I want to focus on here is how, by paying attention to how of signs of "Arabness" surface in Kazablan, we can see how these are on the one hand, used to contribute to the "exotic" nature of the Mizrahim, and on the other, how their actual Arab character is systematically effaced.
Kazablan is the nickname of the protagonist of the film (played by Yehoram Gaon). The name, of course, comes from Casablanca, where the character was born. Kazablan, and his "gang," are clearly marked as Jews of Arab origin. This is accomplished several ways. Among these are the fact that some characters put on a tarbush (fez) to sell goods in the exotic market where they live, in a declining neighborhood of Tel Aviv (that happens to be formerly-Palestinian Arab Jaffa, most of whose population was expelled/fled in 1948). Due to its colorful nature, and its cheap prices, the open-air market is patronized by more well-to-do Ashkenazim from surrounding neighborhoods. Here a Mizrahi character tries to sell a very "ethnic" clay pot to an Ashkenazi shopper, who is clearly marked, and distinguished from the Mizrahi peddler, by his distinctive, kibbutnik, headgear. 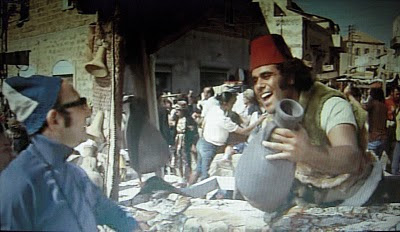 Here the Mizrahi characters are ethnically marked by the fact that they are smoking a nargila or sheesha ("hubbly-bubbly"), a traditional Middle Eastern smoking contraption. They are marked too by their stereotypical position of repose (signifying Oriental "laziness"). 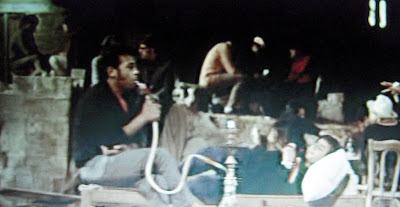 In this scene, the Mizrahi character, at left, smoking nargila, is exchanging insults with Yanush, the Ashkenazi character at right, the owner of a shoe store, who is presented in an entirely unsympathetic light. (The latter is Kazablan's rival in the quest for the hand of the Ashkenazi girl Rachel.) 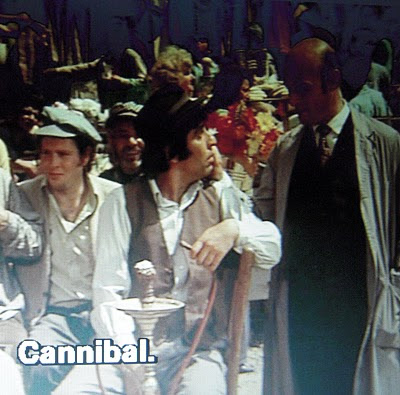 The exoticness of the Mizrahim of Kazablan is also established by the neighborhood in which they live--one which is crumbling, and threatened with demolition by the municipality. It is in fact a "mixed" neighborhood of Ashkenazim and Mizrahim--not in fact very sociologically accurate--but it is the Mizrahim who seem to define its character, who seem to "belong" in a way that poorer Jews from Eastern Europe appear not to. Of course the neighborhood is old Jaffa, the historic Arab-Palestinian city just to the south of Tel Aviv, denuded of most (but not all) of its Arab inhabitants in 1948. Nowhere in the film, I'm pretty sure, is the name Jaffa (Yaffa, in Arabic), mentioned. Here's a shot of the open-air market, from above. Note the rubble (Mizrahim are of the slums), note the primitive atmosphere lent by the horse drawn carriages, near the beach, and at the bottom, at the left and the right. Note that the stone structures clearly signify "Eastern." They are typical of Arab structures throughout in cities throughout the Mediterranean from the first half of the twentieth century. As a resident of Beirut from 1964-1976, they are entirely familiar to me. 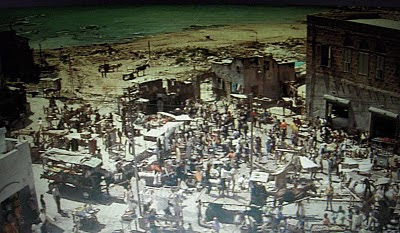 Here's another view. The impressive structure on the right, with its red-tiled roof, is entirely typical of Arab cities like Jaffa, Haifa, Beirut... 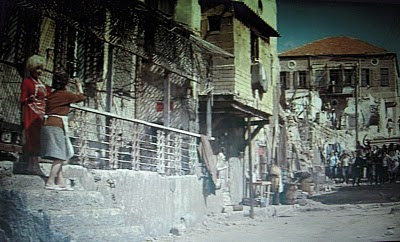 At the same time, while the architecture suggests Arabness, in the film, it is not allowed to say it. One of the most fascinating ways in which the Arabness of the Mizrahi characters is erased in the film is through the music. The film is a musical, full of staged scenes that appear (to me) rather silly and ridiculous. But what is particularly remarkable is the fact that the music is the typical popular Israeli music of the era, rooted in Eastern-European styles, with only a hint or two of Easternness. It reflects hegemonic ideas about the nature of national music, but it has almost nothing to do with the reality of what Mizrahim were into at the time. Their music was rooted in the East, in the Arab world, and the broader Mediterranean. This was a dynamic time for the development of what is variously known as Israeli Mediterranean Music or Mizrahi Music. In the film, however, the Arab musical traditions that were popular in real Mizrahi neighborhoods is nowhere present. The only time it is suggested is in the nightclub that Kazablan and his pals frequent, where Greek music (acceptable because it's "Eastern" and exotic without being Arab) is performed. I know virtually no Hebrew, but it also struck me that the Hebrew spoken by the Mizrahi characters was sprinkled with less Arabic than I would have expected. The Arabness of Jaffa, and of Israel more generally, nonetheless haunts the movie. For instance, this scene, where Kazablan and his pals are prancing around, singing a song. In the background is Jaffa, where a minaret and church steeple are visible, signs of a former presence of a now mostly vanished Arab community, that add to the picturesque atmosphere of the scene. (Kazablan is in the center, dressed in denim, with the fisherman's cap.) 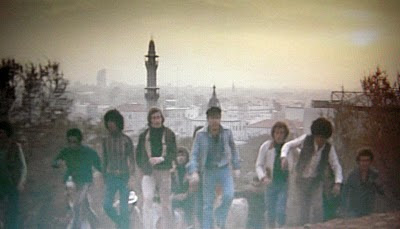 Now we come to the kufiya scenes. The first occurs in the course of one of Kazablan's most well-known songs, "Kulanu Yahudim" (We Are All Jews), which sums up the ideological point of this, and all other bourekas films: despite the differences between Jews of European and Eastern background, all are ultimately united as Jews, and as Israelis, in a common purpose, in the Jewish state. (You can watch the scene here. The quality is poor, but you will get the idea. And also a flavor of the music that characterizes the film.) What is amusing is that if you watch closely, a male figure in a kufiya (and 'iqal, the headband) appears at one point, dancing with a blonde, presumably Ashkenazi, Jewish woman. (Bottom right.) What are we to make of this? It would appear to signify that even Arabs in the Jewish state are "all Jews." Or is this some kind of joke on the part of the director. Whatever the case, the Palestinian Arab, citizen of Israel, certainly haunts the scene. 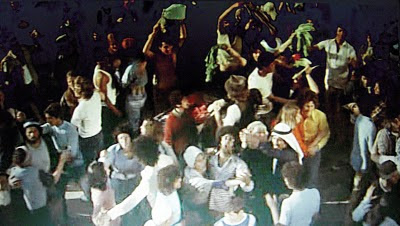 A kufiya shows up at one other point. Rachel, the love interest of Kazablan and Yanush, is walking through the neighborhood market. If I'm not mistaken, pondering who to choose. For just a moment, just behind Rachel, we spot another person wearing a kufiya--this time, black-and-white. He is probably present so as to mark the neighborhood, once again, as exotic and colorful. But he is not offered any opportunity to assert his Arabness. Nonetheless, he, and his kufiya, is a mark of the specter that cannot, will not, be eliminated. 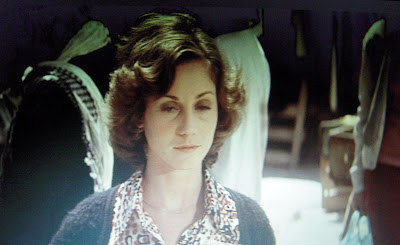 Posted by Ted Swedenburg at 5:47 PM