Thanks to Hisham and Shiva for alerting me to the Dunkin Donuts kufiya furor, which has been posted many times, including the Huffington Post. Conservative blogs made a fuss about a Dunkin Donuts ad featuring t.v. personality Rachael Ray, wearing a black-and-white kufiya around her neck. 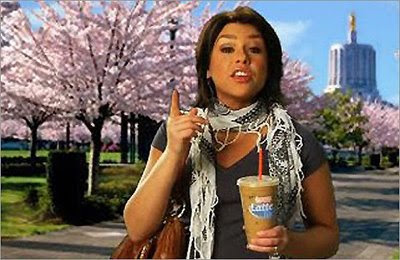 Conservative blogger Michelle Malkin called it a "jihadi chic keffiyeh"--a clever designation I'd not heard before. Michelle was reluctant to launch a boycott of Dunkin Donuts because, she says, its managers "have braved boycott threats and attacks over their lonely, principled stance against illegal immigration." (Here's more on the story from the Boston Globe.)

Rachael Ray has been criticized for her Dunkin Donuts' relationship by rival chef Anthony Bourdain. Bourdain, referring to the diabetes and obesity epidemic among young people, says it's like "endorsing crack for kids."

But maybe Rachael, whose maternal grandparents were from Sicily, was just indicating her ethnic identification, since Sicily was ruled by the Arabs during the ninth and tenth centuries...

Meanwhile, I've heard no furor about the kufiya associated with Grand Theft Auto IV. So I'd like to raise my own objections.

Check out this video for the song "Nickname" by the rapper Qadir (sometimes also spelled Quadir) AKA Da Poet. "Nickname" is part of the music for the recently released video game, the wildly popular Grand Theft Auto IV. This game series has been criticized for its violence, but that is not my concern here. Rather, it is the fact that Qadir, who is a Muslim, and has a reputation for being a "conscious" rapper, has decided to wear a kufiya in a video that features lots and lots of guns. The theme of the song is: "I've got a nickname for all my guns," and the nicknames consist of the names of rappers (dead and alive), like Big Pun, Tupac, and Lil Wayne. The lyrics are actually clever, Qadir has good flow, and it's a catchy song.

But Quadir Habeeb is a "conscious" rapper, and a Muslim one to boot, who so impressed Chuck D (of Public Enemy) that he signed Quadir to his label, SlamJamz.com. So what is he doing in a video where he demonstrates a fond intimacy for all the guns in his big arsenal, and at the same time is wearing a kufiya?! Talk about reinforcing all the associations that US conservatives and right-wing Zionists have attempted to make between the kufiya and jihadi terrorism! (See above.)

For more info about Qadir, check out his myspace page.
Posted by Ted Swedenburg at 12:10 PM

what if Quadir wore a Italian 4 piece Suit would he represent the MOB, or would it better if Quadir a police outfit since some cops Kill Innocent people, THE KUFIYA DOESNT REPRESENT AL-ISLAM ITS ONLY CULTURE!!! BUT IN AMERICA THEY TRY TO STEREO TYPE AL ISLAM EVERY CHANCE THEY GET, IF I WORE A AFRICAN GARB WOULD I STILL BE LOOK UPON THE SAME WAY? PLEASE DONT look at THE MIDDLE EASTERN CULTURE AND AUTOMATICALLY SAY ITS ISLAM BECAUSE ITS NOT

I agree with you that in the US there is a strong tendency to stereotype. So Quadir should be sensitive to that, and should not have put on a kufiya in this video. It just reinforces stereotypes about violent Muslims, violent Arabs, violent Palestinians.