In 2005 a chapter I wrote entitled "Against Hybridity: The case of Enrico Macias/Gaston Ghrenassia" appeared in a book I co-edited with Rebecca Stein called Palestine, Israel, and the Politics of Popular Culture.

One of the things I wrote about was the appearance of Enrico Macias in Egypt in 1979, at the invitation of Anwar Sadat. I only just discovered that the concert he gave on September 22, 1979 at Gazira Stadium was actually released as an album, called Enrico Macias en Egypte, on the Phillips label, that same year. Ah, the marvels of discog.com and YouTube. 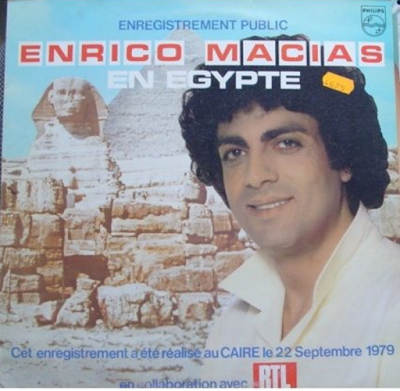 Here is the discographical information, and you can listen to the entire recording on YouTube here.

And here is the tracklist:

Below I've excerpted what I had to say about Macias' visit to Egypt in 1979, and I discuss the song "La Folle Esperance" and the role it played in the trip. He only performs two "Oriental" tracks here: first, "Kelbi-Btala," which he describes as an "Algerian classical" number, featuring Enrico's father Sylvain Ghrenassia (who used to back Cheikh Raymond Leyris) and oud playing from Enrico and second, "L'Oriental," which he originally recorded in 1962. "L'Oriental" was originally made famous by the great Algerian Jewish singer Lili Boniche (I'm not sure in which year). It was composed by the Tunisian Jewish artist, Joseph Hadjedj, better known by his performing name, José de Souza. Here Macias gives it a more "Oriental" inflection than he did on his original recording of 1962, when, as he outlines in his autobiography, he was trying to make it as an artist in France and in order to do so, it was necessary to downplay his Algerian-Arab heritage.

In September 1979, Egypt's President Anwar Sadat organized a festival of peace, on the first anniversary of the Camp David Peace Accords. The Egyptian government invited Enrico Macias to participate, and contacted him--significantly--via the Israeli government (Monestier, Enrico Macias, 178). Clearly, President Sadat did not see Macias as simply a knee-jerk backer of Israel. During the seventies, Macias continued to insert small doses of Arabic music into his live performances and his recordings. In 1977, he composed and recorded “La Folle Esperance,” a song based on a folkloric Arab melody that Cheikh Raymond had played. The song's lyrics praised Sadat's November 1977 visit to Jerusalem, and asserted, “we [Muslims and Jews] are brothers.” Macias reports that, when he first performed the song, on French television, it was a big success, and that the studio audience included many Maghrebis, who clapped and sang along enthusiastically (Macias, Non, je n'ai pas oublié, 327). Another song Macias composed in the early seventies, “Le Grand Pardon,” expressed his hopes that the “sons of Abraham” would achieve peace. In a 1974 interview, Macias went so far as to assert his sympathy for the Palestinians, because they had been uprooted. He did not agree, however, that the Jews were responsible for the Palestinians' dispossession (Monestier, 145).


Macias writes that when Sadat met him in Egypt, he “said first he invited me because his people like me. But he also said to me, 'I made peace with Israel, but I want also to make peace with all Jews in all the world, and for the moment you are the representative of these Jews'” (Richard Cromelin, “Macias: Singer for the Dispossessed,” Los Angeles Times, November 22, 1985, part 6, p. 1). The fact that Sadat chose an Algerian Jew who spoke Arabic to represent world Jewry at the peace festival, rather than an Ashkenazi, is certainly significant; this was not a choice based on European notions of Jewish “representativeness.” Macias was warmly greeted in Egypt where, despite the boycott, his music was well known due to the underground market. In Egypt, Macias did not simply perform his variety hits, but felt comfortable enough to indulge in his Arabic repertoire. At a private concert, for instance, he performed a song by one of Egypt's most beloved stars, Farid al-Atrash, in Arabic. Macias played his third show in Egypt at Gazira Stadium for the general public, with his father Sylvain joining the band on violin. The crowd of 20,000 was enthusiastic, knew the lyrics to his songs, and went wild when Macias took up the 'ud (Monastier, 183). Macias and his father were invited to an audience with Sadat at his winter palace in Ismailiya, and Macias performed a few songs for the small gathering, including “La Folle Esperance,” which he sang in Arabic. Macias has called his encounter with Sadat “the crowning achievement” of his life (Monastier, 183).

(If you want to know my entire "take" on Macias, you'll have to check out the book chapter.)
Posted by Ted Swedenburg at 1:24 PM