I'm in the middle of trying to finish off an article about pop-rai, and hunting for photos of Cheb Khaled and his first band, Les Cinq Étoiles (Ennoujoum El Khams). It was modeled after the Moroccan neo-folk bands like Nass El Ghiwane that were so popular in Morocco, and then were disbanded after Morocco invaded and occupied Spanish Sahara in 1975. Khaled formed the group in 1971 or 1972, performing Moroccan neo-folk material, but by 1974 he was already doing his own material, with "Trig Lycée."

In the course of my research I came across this photo: 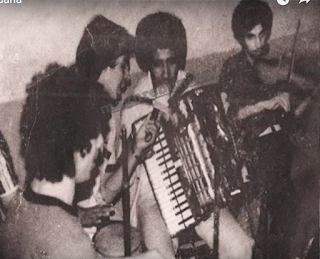 I found it here -- a YouTube video created for the posting of a Cheb Khaled song called "Rayha Ghaydana."

The posting suggests the recording was released in 1979. A Khaled discography that I found (where? I now can't remember) states that this song is from Cheb Khaled's second cassette release, with the name Deblet Galbi. Khaled's first recording (Trig Lycée -- a cassette with four songs) came out in 1974, so this seems like a long gap, as "Trig Lycée" was a hit, but...I just don't know. The musicians shown here could be the ones who played on the Deblet Galbi recording. On some of the tracks, you also hear a guitar. Khaled, of course, plays accordion. Were these guys in Les Cinq Étoiles? Did they also appear on the Trig Lycée release?

Posted by Ted Swedenburg at 1:30 PM