Kufiya'd protester in Lebanon: Down with Bashar 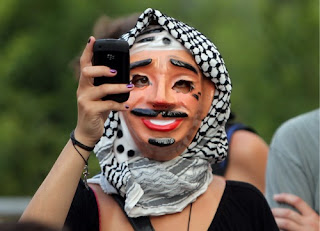 with this caption: A woman wearing a mask and an Arab Keffiyeh head dress uses her mobile photo to record a protest in the Lebanese capital Beirut in support of the five month uprising in neighboring Syria, on August 15, 2011, as Syrian troops clamp down on flash point towns and cities (ANWAR AMRO/AFP/Getty Images).

I'm not sure whether this is supposed to be an Arafat mask. My guess is that the woman is wearing a mask not so much to identify with Arafat as to disguise herself, since demonstrators in Lebanon who have come out in support of the democracy movement have, on occasion, been attacked by local agents of Syrian intelligence, to wit, the local branch of the Ba'ath Party that is affiliated with Syria and by members of the SSNP (Syrian Social Nationalist Party, ex-PPS).
Posted by Ted Swedenburg at 10:21 AM