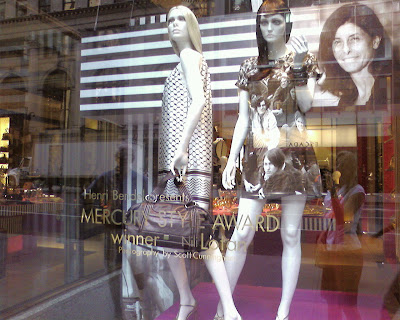 Thanks to Rochelle, who spotted the kufiya sheeth in silk while walking down Fifth Avenue (NYC) over Labor Day weekend and took photos on her cellphone. The designer, as you can read on the window, is Nili Lotan, who is based in New York City, born in Israel. According to the New York Times, Nili Lotan "served in the Israeli air force before working for Nautica and Ralph Lauren." That's her photo in the window. You can read there as well that Nili Lotan is the winner of this year's Mercury Style Awards, sponsored by Elle Magazine. 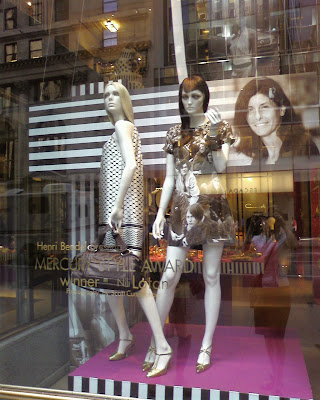 It appears that these two dresses are from her Spring '08 fashion line, which she revealed on September 10 at the New York Fashion Week. Below is a photo of a red kufiya dress shown on the runway. If you check out this youtube clip from the show, it's the eight dress that goes by--although it's hard to recognize that it's a red kufiya design (backless). 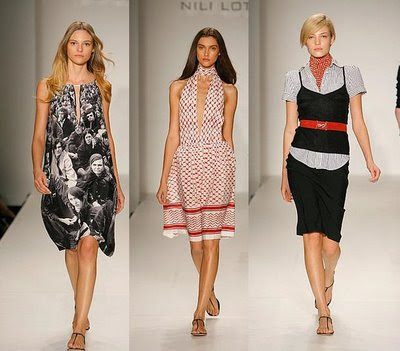 The line will be featured in a spread for American Photo's November 2007 issue. Be sure to check for kufiyas! (I've read some accounts of the line at the New York Fashion Week and no one seemed to notice the kufiya.) 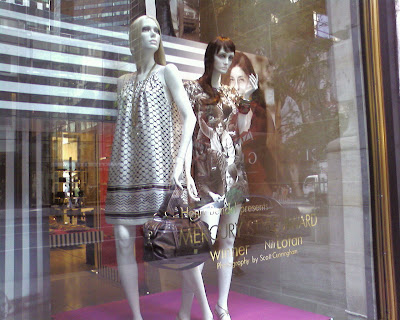 In Israel, however, observers have a keener eye for Palestinian motifs. According to an article published last year in Ha'aretz, she has used Palestinian as well as Yemeni embroidery in her previous designs:

Local embroidery is also incorporated into Lotan's clothes. On a quest for Yemenite embroidery, she met with several older Yemenite women, but says she came to the conclusion that she finds Palestinian embroidery more interesting.

"Yemenite embroidery has one motif," explains Lotan, "while Palestinian embroidery is a whole world. Now I visit a group of women in Segev Shalom, near Be'er Sheva, for ideas. I also plan to use ideas from the sources that inspired Maskit, which I feel is a wonderful project."

The embroideries are a minimal component in Lotan's clothes. "No one would ever figure out where they came from. Even the outfit Paris Hilton wears was inspired by a Yemenite woman. I use these ideas in only a few of my clothes, but they give me a lot of pleasure."

And, according to Ha'aretz, there is a vague sort of political dimension to her fashion, although it doesn't seem to go beyond a desire to stimulate "thinking":

Next spring women in Manhattan could be wearing dresses, skirts and blouses, or even underwear, emblazoned with rifles, submachine guns and pistols. The fashionable woman looking for a slightly more refined message will have an alternative: dresses with oil-well prints, which will go nicely with U.S. Army-issue water canteen belts accessorized with silver buckles.

The designer behind this arms-print collection is Nili Lotan, an American-Israeli and a familiar figure on the American fashion scene....

"I'm sick of drawing flowers, circles and stripes, and decided to look for graphic shapes that would express my experiences," says Lotan, explaining the rationale behind her new collection, which will be presented in January 2007. "This is not about a protest, but rather an expression of what I feel. I want to stimulate women to think. What's happening around the world today bothers me. What's happening in Israel and the Middle East bothers me even more. I was in Israel for a week during the war in Lebanon, and I am very worried. Still, I thought up the idea for dresses with gun prints beforehand."

Lotan realizes that her collection may not interest fashionistas from Park Avenue.

I've not yet found the guns and oil-well Lotan lines...
Posted by Ted Swedenburg at 8:57 PM