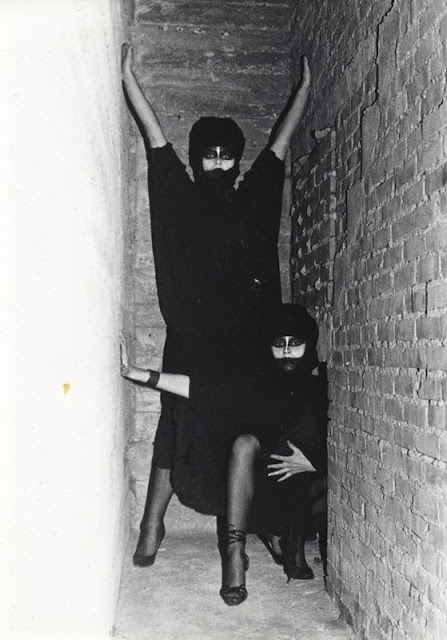 "Bedouin funk archive" and "Oriental disco-funk tunes" -- this is how Dazed Digital describes the recent eponymous release of this '80s project's canned recordings. They also describe it thus: "Combining the occasionally stony, stark minimalism of European electronics with the groove-laden funk of Turkish and Kurdish folk."

Dazed Digital has interviewed DJ Ralph “von” Richtoven and singers Stephanie Lange (but not singer Claudia Hossfeld) on the occasion of the release. What I found of interest was how they describe the recordings "Eastern" feel. Excerpts follow:

von Richtoven: The band? Well there was no real band. It was a lot of friends from the music scene. I also gathered some traditional Kurdish folk musicians from the local Turkish communist party to play some more Eastern instruments on the tracks. I didn't really want a band – Saâda Bonaire was a pop-art project...

We saw the strong influence that Afro-Cuban sounds had on American music. We could hear the influence that Caribbean and Indian immigrants had on British music in the 80s. In France, they had the Rai music from the Maghreb and a lot of musicians from West Africa. In Germany, we only had Turkish immigrants... millions of them. In the 1970s I studied social work. By the 1980s, I was working for the German government's immigration department. I was responsible for many immigrant social clubs in Bremen. I was also collecting music tapes from Turkey and Egypt since 1975. In theory it was obvious what we had to do: fusion. In reality it was very difficult and almost impossible.

So there you have it: Cool German artists want to emulate the hip reggae and bhangra sounds coming out of England and the "rai" and West African influence on French music. [As an aside, I'm sure this an anachronism, as I seriously doubt that pop rai was much evidence in Germany as early as 1982.] But they "only" had Turks around...who happened to be Kurds who belonged to the Turkish Communist Party?

But maybe not, if they don't know the difference between Bedouin and Turks...